Gold up for sixth day as stocks, dollar remain on shaky footing

Gold was a tad lower first thing this morning – understandably so after Tuesday’s big rally – before turning positive in the afternoon. The precious metal is now up for the sixth consecutive day and has made back almost the entire losses suffered earlier in the month.

Gold was a tad lower first thing this morning – understandably so after Tuesday’s big rally – before turning positive in the afternoon. The precious metal is now up for the sixth consecutive day and has made back almost the entire losses suffered earlier in the month.

I am expecting gold to rise further. Wall Street is on a shaky footing, which could very well keep demand for perceived safe haven assets high. On top of this, the dollar continues to remain under pressure, which should keep the dollar-denominated commodity underpinned. The USD/JPY has broken below significant support around 111.50, while the EUR/USD was testing the top of its recent range around 1.0820/30 at the time of this writing. If these dollar crosses move further in the direction of their current trends, the greenback could suffer from momentum selling. Correspondingly, gold could benefit.

From a technical perspective, gold’s almost v-shaped recovery from the key $1200 handle suggests more gains are likely to be seen. But the precious metal was testing an important level at $1251 at the time of this writing.  This level was the last support pre breakdown at the end of February. Once support, it could turn into short-term resistance. However, the manner in which gold has risen suggests to me that more gains are likely. The next levels of potential resistance – or bullish targets – are shown on the chart. Among them are the 200-day moving average at just shy of $1260; the previous support and resistance area between $1263 and $1269, and the 61.8% Fibonacci retracement level at just below $1279.

But these could turn out to be temporary stops ahead of significantly higher levels if demand for gold remains elevated, say, as a result of a stock market crash. Indeed, should gold break its well-established long-term bearish trend line, then that should pave the way for more follow-up technical buying.

Meanwhile on the downside, there are plenty of potential support levels to watch. The key ones being at $1235 and then that $1200 handle. If the latter breaks down, this would invalidate this bullish long-term outlook on gold. 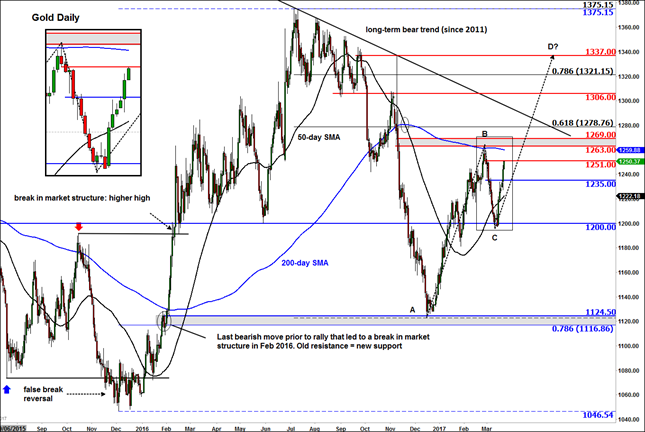