Has USD/JPY bottomed out?

This week has seen the USD/JPY stage a remarkable recovery. After dipping momentarily below 100 on Friday of last week, the unit has climbed some 600 pips to reach a high so far of almost 106.00 today.

The rebound has been driven by speculation about a potential Bank of Japan intervention of some sort, a general enhancement in risk appetite and a slight improvement in US data.

Last Friday’s stronger employment report for the month of June was followed today by better-than-expected readings for US weekly unemployment claims (254K vs. 263K expected) and the Producer Price Index (+0.5% m/m vs. +0.3% expected).

Tomorrow will perhaps be the most important day of the week for the dollar as we will have the latest Consumer Price Index (CPI) measure of inflation, retail sales for the month of June and the closely-followed gauge of consumer sentiment from the University of Michigan. Headline and core CPI for June are both expected to come in at +0.2% m/m following similar readings in May. Headline retail sales are seen rising 0.1% while core sales are expected to come in at 0.4%. Meanwhile the UoM Consumer Sentiment index is expected to show little improvement from last month’s 93.5 showing.

Ahead of all this, China will be publishing some important data of its own in the early hours of Friday: second quarter GDP and monthly snapshot of retail sales, industrial production and fixed asset investment, all for the month of June. Growth at the world’s second largest economy is expected to have moderated further in Q2, to 6.6% from 6.7% in Q1 compared to the same quarter of last year. Likewise, industrial production, fixed asset investment and retail sales are all expected to have moderated from their prior readings.

So, the outcome of the abovementioned data on Friday will have an impact on the direction of the USD/JPY, especially if they show significant deviations from expectations. Given the extent of this week’s rally, traders are likely to put more weight behind weaker numbers as they will look for any excuse to book profit. Meanwhile the US stock markets appear to be severely overbought in the short-term outlook and if we see a small correction here then this too may add some downward pressure on the positively-correlating USD/JPY.

Obviously the opposite is also true and as you will see below, I am leaning more towards the bullish side of the argument, even though the USD/JPY has reached a potential resistance area which could lead to some short-term downward pressure.

The USD/JPY has indeed reached a major technical area around 105.55-106.80. As can be seen from the weekly chart, below, this area was previously support and resistance. The upper end of this range is where the 200-week moving average converges with the top of the bearish channel. For these reasons alone you would expect to see a pullback of some sort here. While that seems to be the logical expectation and we may well get a reaction there, I can’t help but feel the USD/JPY will eventually slice through this area before extending its advance.

It appears as though there is plenty of momentum behind this rally, with the rest of the JPY pairs also showing some reversal signs in recent days. Added to this, the US equity indices have surged to fresh record levels and the USD/JPY being a risk-sensitive FX pair – which tends to correlate positively with the stock markets – it could break higher, too.

What’s more, the USD/JPY has already staged a significant pullback following its big multi-year rally, so it could be ready to start climbing higher once again as some investors will no doubt think that the unit has fallen below its fundamental value. The pullback to the 50% retracement level (100.70) and the re-test of, and subsequent rejection at, prior support and psychological level of 100 are additional reasons why we may see a bigger bounce. Meanwhile the Relative Strength Index (RSI) has already broken out of its own corresponding channel in advance of price doing the same. So, could the USD/JPY follow suit now? 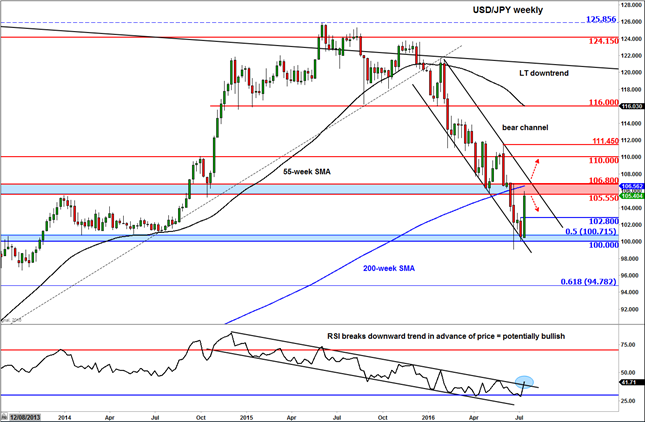