China’s producer prices softened from a 26-year high, begging the question as to whether a key inflationary input has peaked.

Of course, it’s early days but it is something central banks such as the Fed would want to see, as inflationary forces globally can correlate over longer periods. So they may like to hear that China’s PPI eased to 12.9% y/y after hitting a 26-year high in October. 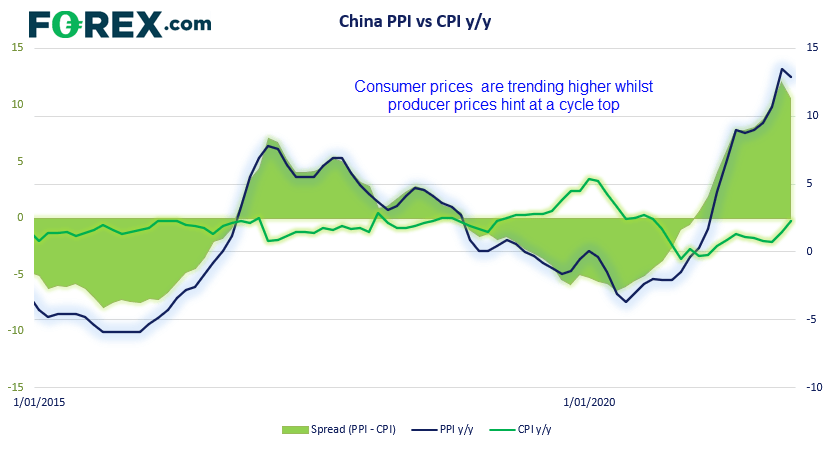 An interesting observation is that the spread between China’s PPI-CPI moved lower for the first month in 18, thanks to higher consumer prices alongside lower factory gate prices. The two inflation reads used to share a fairly stable correlation, although it has been much weaker since 2016. But at some point, rising producer prices are likely to be passed on to the consumer, and that is now becoming apparent with CPI trending higher. China’s consumer prices rise 2.3% y/y in November, their highest level since August 2008. Food prices rose 1.6% y/y compared with non-food at 2.5%

A slight positive here is that profit margins haven’t been squeezed quite a horrendously as the previous month, and one has to question whether the cycle has topped. If so, profit margins could increase and that could benefit equity markets going forward. Meanwhile, with inflation at the consumer end only now trending higher, consumers are yet to fully feel the squeeze. Although with Beijing’s wealth-distribution policies and housing sales reportedly down around -60% y/y, higher consumer prices may be the last thing the economy needs. And that may not be ideal for equity markets if PBOC have to fend off inflation by tightening. And we certainly would not expect them to allow consumer prices to rise to double digits before acting. But for now, 2.3% seems fairly management compared to the higher prints seen across parts of the West. Last week we noted the potential for Asian indices to bounce from key levels of support, and the risk-on vibe for markets since has allowed them to do just that. The Hang Seng has risen to a 9-day high as part of its countertrend move. Yet it remains in an established bearish channel and resistance sits around 24,500 with the November low and 38.2% Fibonacci ratio. From here we are now seeking evidence of a corrective high to form and for prices to revert to its bearish trend, although take note that RSI (2) is not yet overbought which leaves some wriggle room to the upside first. 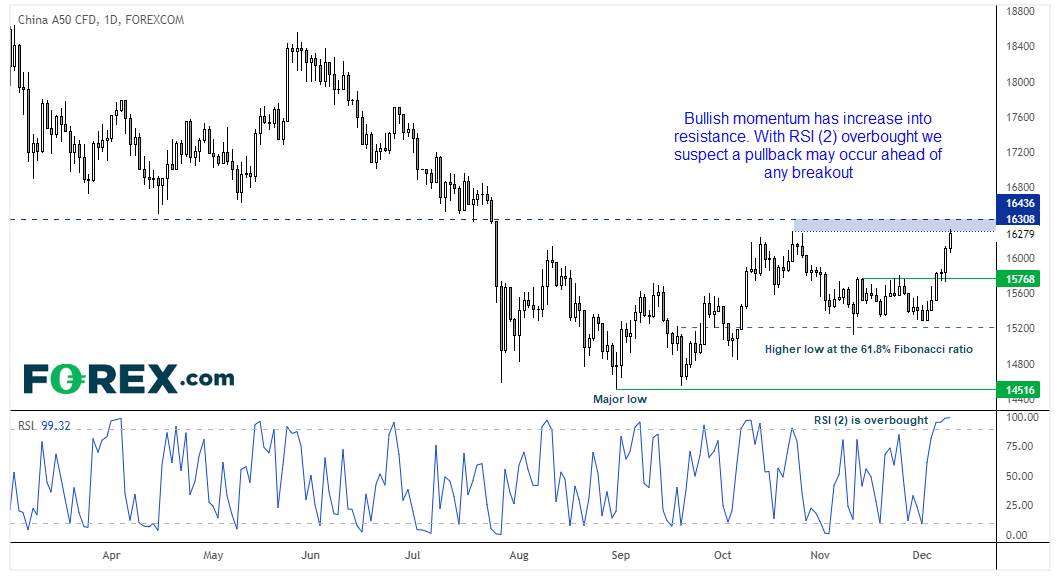 The China A50 is amidst its most bullish week in over 6-months after Beijing’s decision to lower the RRR (Reserve Requirement Ratio) and abated fears of Omicron sat well with risk sentiment. We continue to believe the market saw a significant low in August, and its pullback from the October high found support around the 61.8% Fibonacci level to form a higher low. Bullish momentum has increased back into resistance and, as RSI (2) is overbought, it leaves the potential for a retracement ahead of any breakout.