Some of the mainland European stock indices eked out small gains last week despite the falls in US, UK and Japanese stock markets. However, at the start of this new week, global equities have rebounded across the board while the dollar has extended its gains further against a basket of foreign currencies. Sentiment in the stock markets therefore remains positive despite a slightly more hawkish Federal Reserve. This is mainly because of the fact that central banks elsewhere are pretty much dovish, most notably in Japan, the Eurozone and now the UK.

Some of the mainland European stock indices eked out small gains last week despite the falls in US, UK and Japanese stock markets. However, at the start of this new week, global equities have rebounded across the board while the dollar has extended its gains further against a basket of foreign currencies. Sentiment in the stock markets therefore remains positive despite a slightly more hawkish Federal Reserve. This is mainly because of the fact that central banks elsewhere are pretty much dovish, most notably in Japan, the Eurozone and now the UK. Indeed, the Bank of Japan’s governor, Haruhiko Kuroda, reiterated at the Jackson Hole Symposium that they wouldn’t hesitate to take further stimulus measures in order to meet the 2% inflation target. Meanwhile, bond buying programmes from the BoE and ECB are both ongoing. A small rate rise in the US would not be the end of the world anyway, though it may put further upward pressure on dollar. This in turn should translate into stronger USD/JPY and weaker EUR/USD exchange rates, ceteris paribus. Consequently, the export-oriented stock markets in Japan and Germany could start to outperform the US going forward, provided that Friday’s US jobs report does not put to bed talks of a 2016 rate rise once and for all.

So, central banks are and will probably remain extremely accommodative, even despite the prospects of a small rate rise in the US. This fundamental view should keep stocks, especially in Europe, supported until and unless there is a compelling reason for investors to dump their holdings. Indeed, Germany’s DAX index was trading a good 1% higher at the time of this writing on Tuesday, mirroring similar gains for mainland European stock indices. The index has was testing last week's high around 10660 at the time of this writing.

We have been monitoring the DAX index closely even before it came out of its laborious consolidation at the start of this month, and have been talking a great deal about the current bullish market structure. As a reminder, the benchmark German stock index recently took out its bearish trend line and the neckline of its inverse Head and Shoulders pattern, rallied to ‘fill’ the gap that it had left behind at the start of the year, and then pulled back as traders took advantage of short-term ‘overbought’ conditions (as the momentum indicator RSI traded near 70) and took profit at around the key resistance level of 10745. Meanwhile the rising 50-day moving average has climbed above the 200 in a development called a “Golden Crossover.” For some momentum traders, when the moving averages reside in this order, they only look for buy rather than sell setups.

What’s more, the DAX’s pullback from the highs achieved in mid-August has been a shallow one. More importantly, the broken key resistance and the point of origin of the breakout in the 10365 to 10475 range has turned into support. Today, the index has even gapped higher to break out of its bullish flag pattern. Clearly, the DAX is showing characteristics of a strong bullish market – either that or I am missing something.

While it may be far too early to tell, this week’s bounce could potentially turn out to be the onset of another big rally, assuming we will see a sustained break above last week’s high of 10660 now. However, if the buyers fail to hold their ground in the key 10365-10475 area then this would be a very bearish outcome. But our base case is that the bulls will win the battle here and that we could see a potential rebound towards the prior resistance level of 10745 initially and eventually the long-term 61.8% Fibonacci retracement level at 10980, which is also the projected point D of the ABCD pattern. 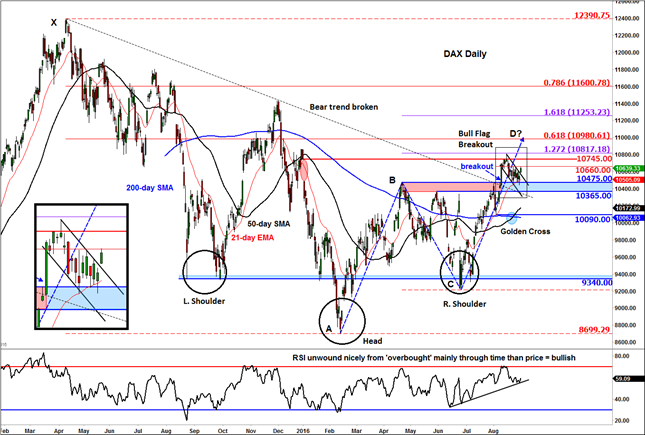