In a somewhat similar fashion to the Brexit situation, the pound tanked and FTSE was quick to recover its poise as the market reacted to the possibility of a hung parliament overnight, which was later confirmed this morning.

In a somewhat similar fashion to the Brexit situation, the pound tanked and FTSE was quick to recover its poise as the market reacted to the possibility of a hung parliament overnight, which was later confirmed this morning. The pound has since bounced back noticeably but it will likely remain largely out of favour due to heightened political uncertainty. But whatever happens now and whoever forms the new UK coalition government, we will probably work towards a softer Brexit deal than would have been the case in an outright Conservative victory. This, along with the possibility of the pound remaining soft, should help to keep the FTSE supported. That’s of course assuming everything else is held constant. Indeed, if global equity markets fall due to some other factor then the FTSE will probably suffer too, regardless of what the pound does.

As far as the pound is concerned, well if it has any chance of making a quick short-term comeback, one would think that it would probably be more apparent against the euro after Mario Draghi poured cold water over expectations of tapering ECB QE early on Thursday. The euro has been largely out of favour over the past five days and is set to end the week lower against most of her rivals. Thus, any strength in the pound is likely to be expressed in the EUR/GBP pair in the short-term, as it was at the time of this writing. However, the single currency may be down now but is definitely not out. Economic data in the Eurozone continues to improve and speculation about tapering QE will likely come back to haunt the euro bears. In fact, ECB’s Nowotny was quoted as saying that he expects the ECB will discuss tapering in July and September meetings, according to Bloomberg. This headline was met with a muted response, however. Nevertheless, we expect the euro’s weakness to be short-lived. Indeed, if the pound were to remain out of favour, the EUR/GBP could break to new yearly highs soon. But as noted, in the short-term, there is a risk that the takes an oversold bounce and this may keep the EUR/GBP under some pressure.

The EUR/GBP pair has reacted nicely off a key resistance level around 0.8860 (the lower bound of an old support area between 0.8860 and 0.8990), and was back at a key support at 0.8740 (the point of origin of the latest breakout) at the time of this writing. These levels will be very important watch as the next move should make things clear in terms of which direction the path of least resistance will be. Below 0.8740, the bias would be bearish towards 0.8655. Above it, the bias would remain bullish and more so if that 0.8860-0.8900 resistance breaks gives way. 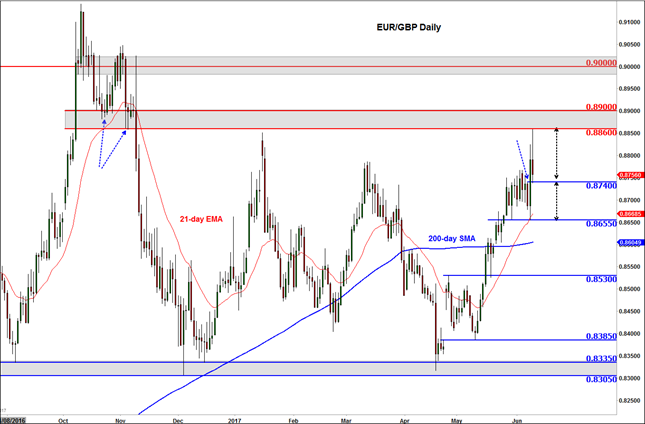