Continued optimism over last week’s reported deal struck by members of the Organization of the Petroleum Exporting Countries (OPEC) at an energy conference in Algeria has boosted crude oil prices sharply. Oil surged even further on Monday after Iranian President Hassan Rouhani reportedly called on non-OPEC producers to contribute to lowering global production and supporting prices.

Continued optimism over last week’s reported deal struck by members of the Organization of the Petroleum Exporting Countries (OPEC) at an energy conference in Algeria has boosted crude oil prices sharply. Oil surged even further on Monday after Iranian President Hassan Rouhani reportedly called on non-OPEC producers to contribute to lowering global production and supporting prices.

This new development is especially relevant as there have been ongoing concerns over whether Iran would actually take part in any OPEC deal due to the country’s widely-acknowledged goal of making up for lost time by boosting its post-sanctions market share. Iran’s position regarding non-members is also critical due to concerns that even if OPEC cuts a deal to lower production, non-OPEC members, like the US, may simply increase production to gain their own additional market share.

The future of crude oil prices therefore lies in the balance. Sustained optimism over the OPEC deal, the details of which will not likely be known until the next OPEC meeting in November, will depend largely on whether major non-OPEC producers would be willing to participate or not. The likelihood of US participation will depend to a large extent on who becomes the next US President in November. Donald Trump has expressed his goals to deregulate oil production and increase capacity, which will likely increase US production and weigh on crude oil prices. In contrast, Hillary Clinton is determined to shift substantially towards solar and other renewable energy, which would lower US oil production and could lead to a subsequent rise in oil prices, especially in concert with any OPEC deal.

For now, however, the optimism continues, with the Brent crude benchmark reaching above $50/barrel on Monday and West Texas Intermediate (WTI), the US benchmark, reaching up towards the $49 level. Sustaining these levels, however, could be difficult, as the OPEC deal should only be truly effective if major non-OPEC producers agree to participate, as Iran has suggested.

As it currently stands, WTI has recently broken out above a previous downtrend resistance line and approached major resistance around the $49 level, an intermediate high established in August. A fall from this resistance could open the way for a return towards the key $43 support level. With any continued rise in OPEC-optimism above $49 resistance, however, further major resistance continues to reside at the critical $50 psychological level. 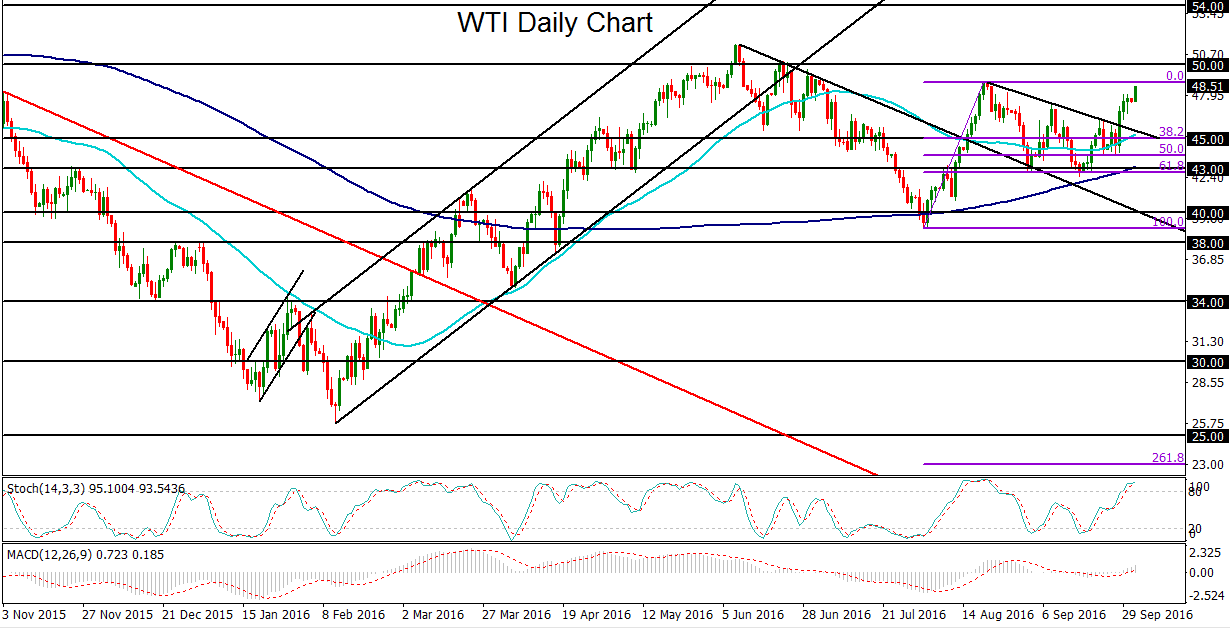