A strong session overnight for US equity markets as solid corporate earnings and economic data pushed the S&P500 index to a record close. Second-quarter reporting season is now almost three-quarters complete, with nearly 70% of the companies in the S&P 500 having reported. Of those, a record 87.6% have beaten consensus expectations.

In recent weeks, strength in corporate earnings has helped US equity indices climb a wall of worry, including the spread of the Delta variant and Chinese regulatory clampdowns. Although as noted last week here sharp downside moves in Chinese stock markets no longer result in widespread contagion in markets outside of China as it has in the past.

A reflection of the modern-day realisation that the Chinese economy is not integrated into global markets and local markets, whether the RMB or equity markets, are managed in the direction that authorities prefer.

On the subject of the Delta variant, central banks have been remarkably sanguine about its spread over the past week. Federal Reserve Chairman Powell commenting after the latest FOMC meeting, "there has tended to be less in the way of economic implications from each wave. We will see whether that is the case with the delta variety, but it's certainly not an unreasonable expectation."

The uber dovish RBA included in its statement yesterday an acknowledgment, "The experience to date has been that once virus outbreaks are contained, the economy bounces back quickly."

Further supporting equity markets, reports that countries including the UK are approaching herd-immunity. The University College London estimate total UK population immunity at 87%, close to an estimated herd-immunity threshold of 93%.

After following the road map to new highs outlined two weeks ago here, the expectation is for the S&P500 to push higher again towards trend channel resistance, currently at 4470ish in coming sessions.

From near trend channel resistance, look for the rally to stall and a pullback to develop towards trend channel support at 4320/00, in line with the weaker seasonal’ s seen during August. 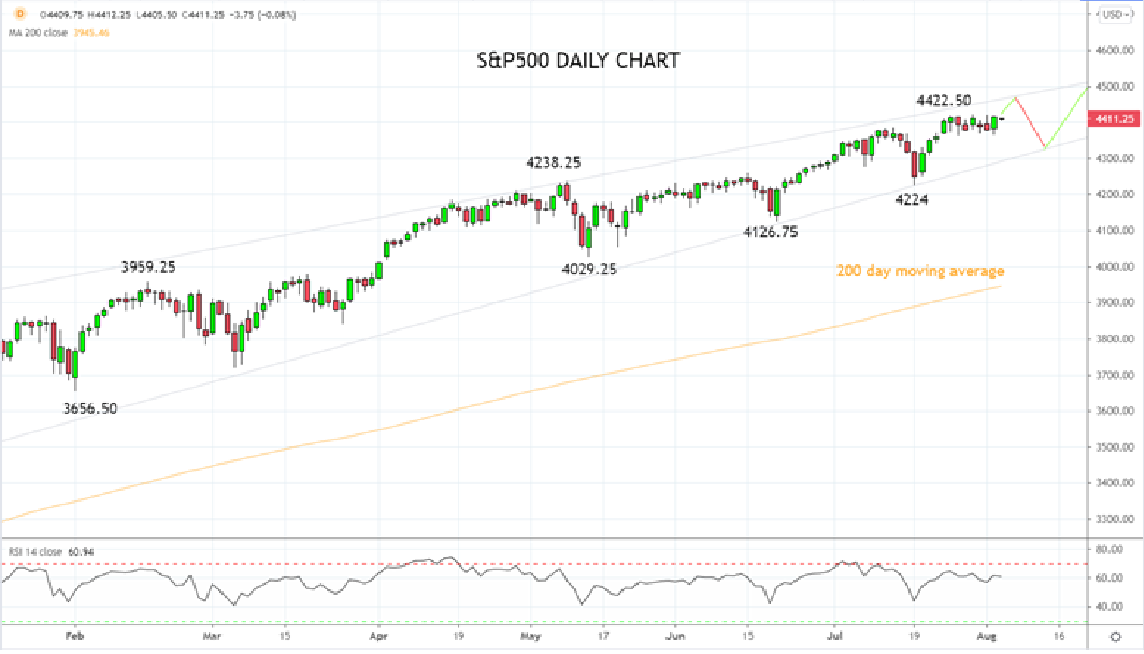 Source Tradingview. The figures stated areas of the 4th of August 2021. Past performance is not a reliable indicator of future performance. This report does not contain and is not to be taken as containing any financial product advice or financial product recommendation