The FOMC is expected to announce that they will begin tapering their quantitative easing program. What does that means for the S&P 500?

It’s the day before the FOMC is expected to announce that they will begin tapering their quantitative easing program.  As discussed in detail in our FOMC Preview, the Fed is currently purchasing $80 billion in Treasuries per month and $40 billion in MBS per month.  One suggested pace of the tapering is for $10 billion a month in Treasuries and $5 billion a month in MBS.  This would be consistent with Powell’s previous comments that tapering would be finished by mid-2022.  The S&P 500 made is at all-time highs near 4635, just above the 127.2% Fibonacci extension of the move from the highs of September 3rd to the lows of October 1st.   But will it continue after the FOMC announcement? 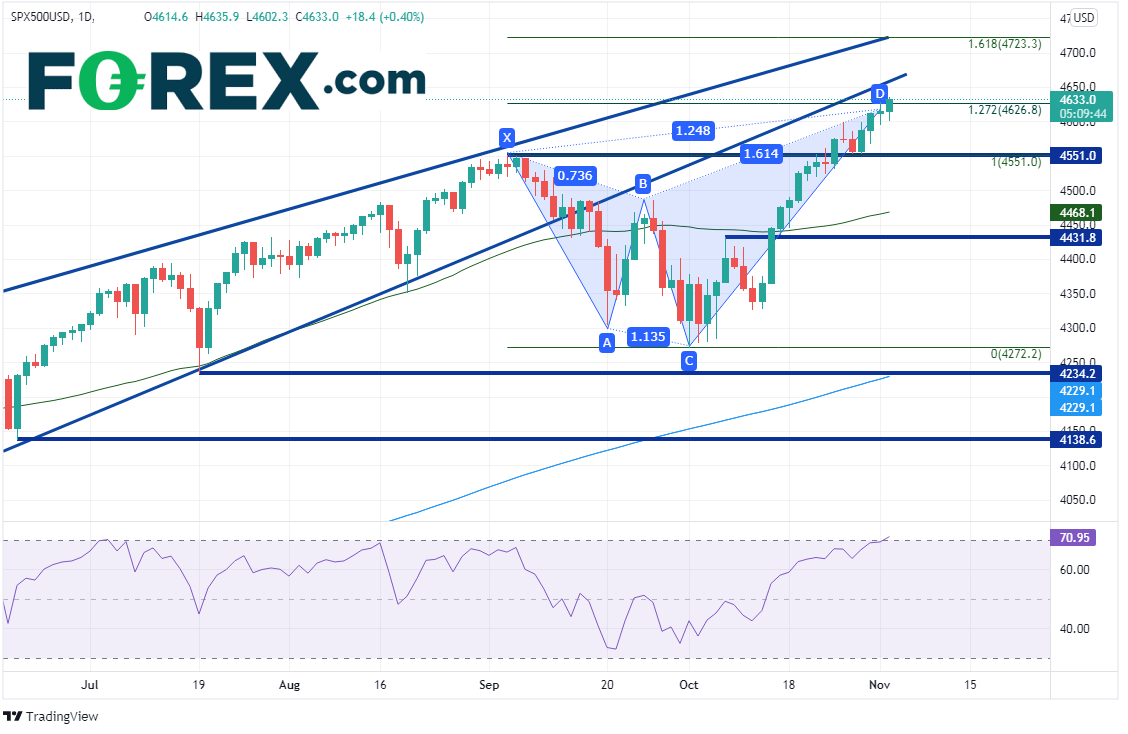 If the Fed is more hawkish than expected (i.e. a faster tapering pace or any mention of an interest rate hike timeframe), the S&P 500 is likely to pull back.  First support is at the breakout level of the September 3rd highs at 4551. Below there is the 50 Day Moving Average at 4467.9, horizontal support at 4431.8, and the October 1st lows at 4272.2.  Note that the RSI is moving into overbought territory on the eve of the FOMC meeting, an indication price may be ready for a pullback.  In addition, on the daily timeframe, price has formed a bearish shark harmonic pattern, another indication price may be ready to move lower.

If the Fed is more dovish than expected (i.e. taper will happen soon, but no mention of the pace) , the S&P 500 may take off higher. First resistance is at the bottom trendline of the long-term upward sloping wedge near 4660.  Above there is a confluence of resistance at the top trendline of the same wedge at the 161.8% Fibonacci extension of the move from the September 3rd highs to the October 1st lows.

If the Fed is neutral (i.e. taper announced, slow pace, tapering will end in mid-2022), stocks may continue bid.  With the S&P 500 on its highs, an “as expected” statement would give stocks no reason to pause.

Don’t forget that Friday is Non-Farm Payrolls for October.  The Fed doesn’t meet again until December 15th, at which time they will release a new Summary of Economic Projections.  Therefore, they will have 2 more months of jobs data before their next meeting.  If employment (or inflation) moves lower before their next meeting, there is always a chance the Fed puts the brakes on the tapering, which could send stock indices higher once again!