Just as it appears that nervous markets have been put at ease by last Friday’s weaker-than-expected wage growth figures, key inflation numbers to be released this week are potentially set to create more uncertainty for investors.

Just as it appears that nervous markets have been put at ease by last Friday’s weaker-than-expected wage growth figures, key inflation numbers to be released this week are potentially set to create more uncertainty for investors. US Consumer Price Index data is scheduled to be released on Tuesday, while the Producer Price Index is slated for Wednesday.

Last Friday's US jobs report revealed that month-over-month average hourly earnings in February rose by only 0.1%, which was lower than both the expected 0.2% and the previous month’s 0.3%. Annualized, that came out to 2.6%, which was lower than the 2.8% expected. More than a month earlier, in the beginning of February, January wage growth data came out higher-than-expected, sparking a wave of concern about inflation and interest rates, and leading to sharply elevated market volatility as stock prices briefly entered into correction territory.

Friday’s weak hourly earnings data contradicted the previous month’s strong wage growth, easing equity market concerns about inflation and helping to prompt a robust rally for stocks on Friday. This stock rally cooled down significantly by Monday. Meanwhile, the US dollar was moderately pressured by Friday’s low wage growth figures, despite a stellar headline reading for job creation at 313,000 jobs added in February against prior expectations of around 200,000. The resulting dollar weakness continued into Monday.

From a technical perspective, USD/CAD has pulled back sharply in the past week from the key 1.3000 psychological resistance level to trade just above a key uptrend support line extending back to the 1.2250-area lows of late January and early February. Any markedly weaker-than-expected inflation readings this week could lead to a boost for stocks and further pressure on the struggling dollar. Such pressure could prompt a trend line breakdown for USD/CAD, with an immediate downside target around the 1.2700 support area. In contrast, any stronger-than-expected inflation readings this week could lead to more volatility for stocks and a boost for the dollar. In this event, a bounce off the trend line for USD/CAD could once again target a retest of the noted 1.3000 resistance highs. 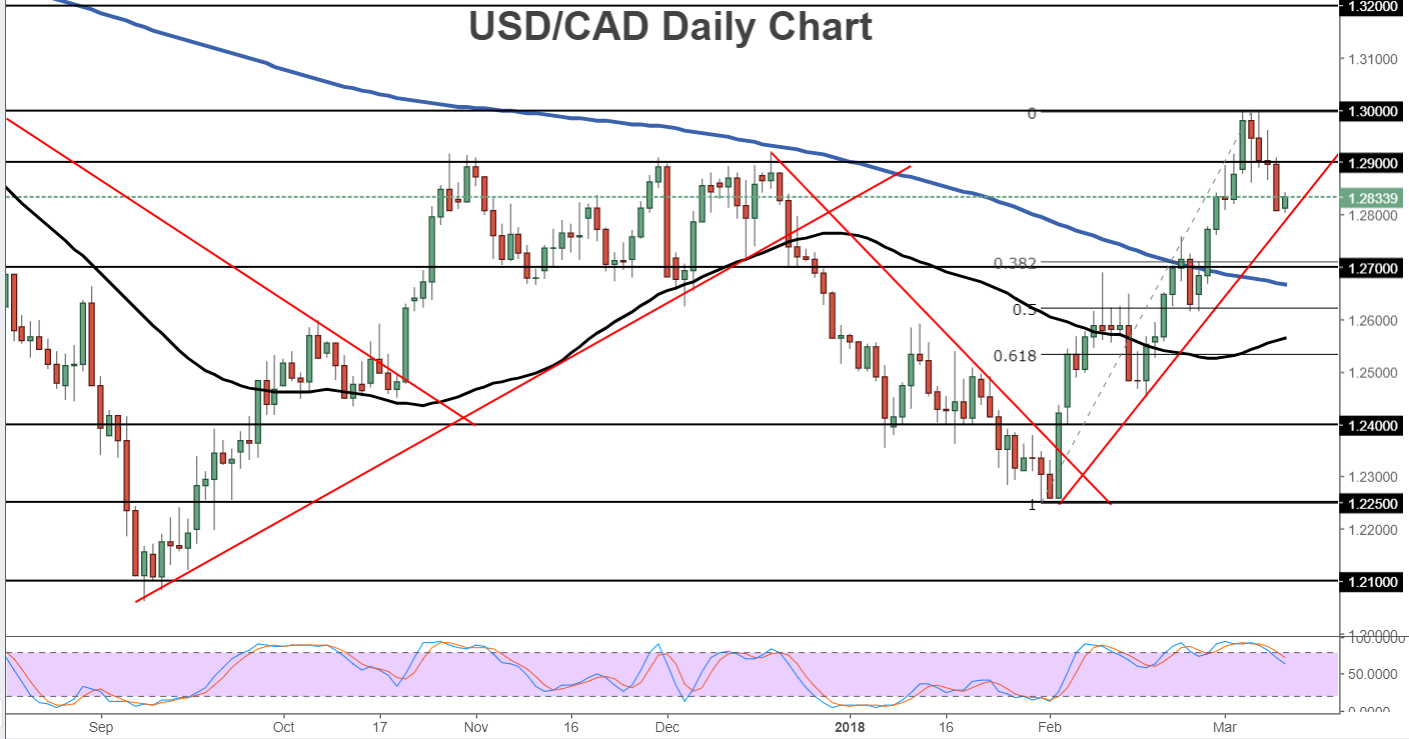