The actual number was more than double the expectations!

Initial Jobless Claims were released earlier today, and the number was not pretty.  Yesterday, we discussed how this number was expected to be larger than any we had ever seen before.  According to Bloomberg, the average estimate by economists was 1,500,000 initial jobless claims filed for the week ending March 21st.  The actual number was 3,283,000 vs the previous week’s number of 282,000.  This week’s data shows how badly the economy has been hit by the shutdown from the coronavirus, as the actual number was more than double the expectations!  As this is the timeliest data we have (weekly), this will now be the benchmark going forward.  Initial claims greater than this number will be negative for the economy and lower numbers will show that the worst may be behind us.   The S&P 500 and US Dollar initially went bid as this data, which suggested how important it is for congress to pass the stimulus plan to help unemployed workers.

In addition to the initial Jobless Claims data this morning,  US Fed Chairman went on the “Today” show earlier (a rare live television interview) noting that the US may already be in a recession.  He also said that the Fed will not run out of ammunition and that he expects economic activity to resume in the second half of the year.  This was an attempt for the Fed Governor to speak directly to people who may have lost their jobs or may not have day to day updates with the economic information.

The DXY had been moving lower since yesterday afternoon.  While the US Dollar Index continued to move lower as Powell mentioned “recession”,  it briefly bounced after the initial jobless claims before resuming lower.  We wrote yesterday about the technical layout of DXY, which looked as it could be ready to resume its move higher.  The pair has since broke lower out of the pennant and US Dollar pairs, such as EUR/USD and GBP/USD have move higher (inverse relationship).  Technically, unless today’s  price move proves to be a false breakdown (which its too early to tell), then price should resume lower. There is support near the day’s lows at 99.87.  A daily close below there could indicate a continued move lower. 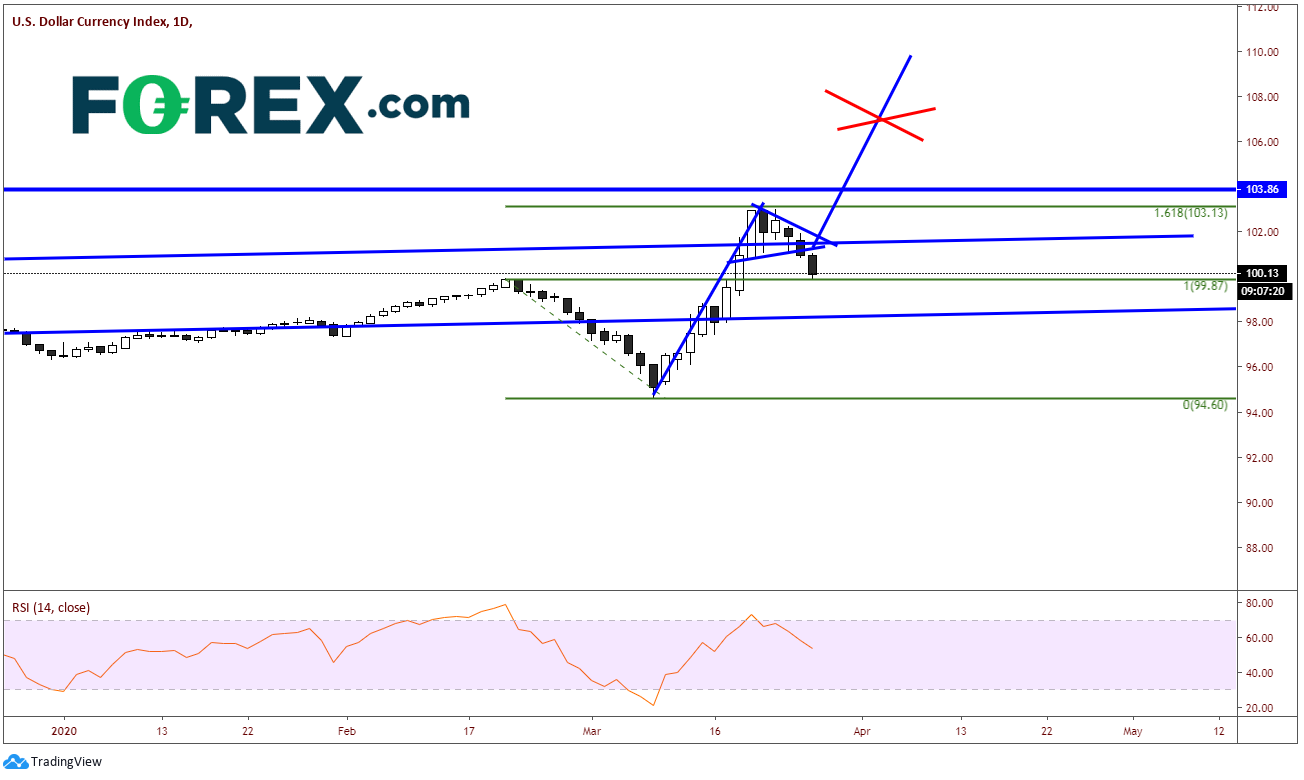 Fundamentally, the case can be made for the DXY to move higher or lower.  The case for a move higher is that because there is such a huge demand for US Dollars, the price should move higher as more and more funds are needed to keep businesses afloat.  On the other hand, one can make a case that, as recently as today, the Fed said that they will provide unlimited funding, therefore flooding the markets with US Dollars.  This huge supply should push the value of the DXY lower.

With Powell and the Initial Claims pointing towards “bad” news for the economy, the next item on the agenda will be the vote on the stimulus package.  The longer this gets delayed, the worse off those will be who lots their jobs.