Is now the time for the China A50 to break higher?

One of our most popular Indices to trade in China, the China A50, had been trying to pull back through support below 16,440.  But thus far, has failed to do so.  Does that mean it will move higher from here? After putting in pandemic lows near 11,495 on March 19, 2020, China’s main index moved aggressively over the next 11 months to a high of 20,603 on February 18th.  With a diverging RSI, the China A50 pulled back to the 38.2% Fibonacci retracement level from the same timeframe to near 17,140 on March 21st and has been oscillating around that level since. 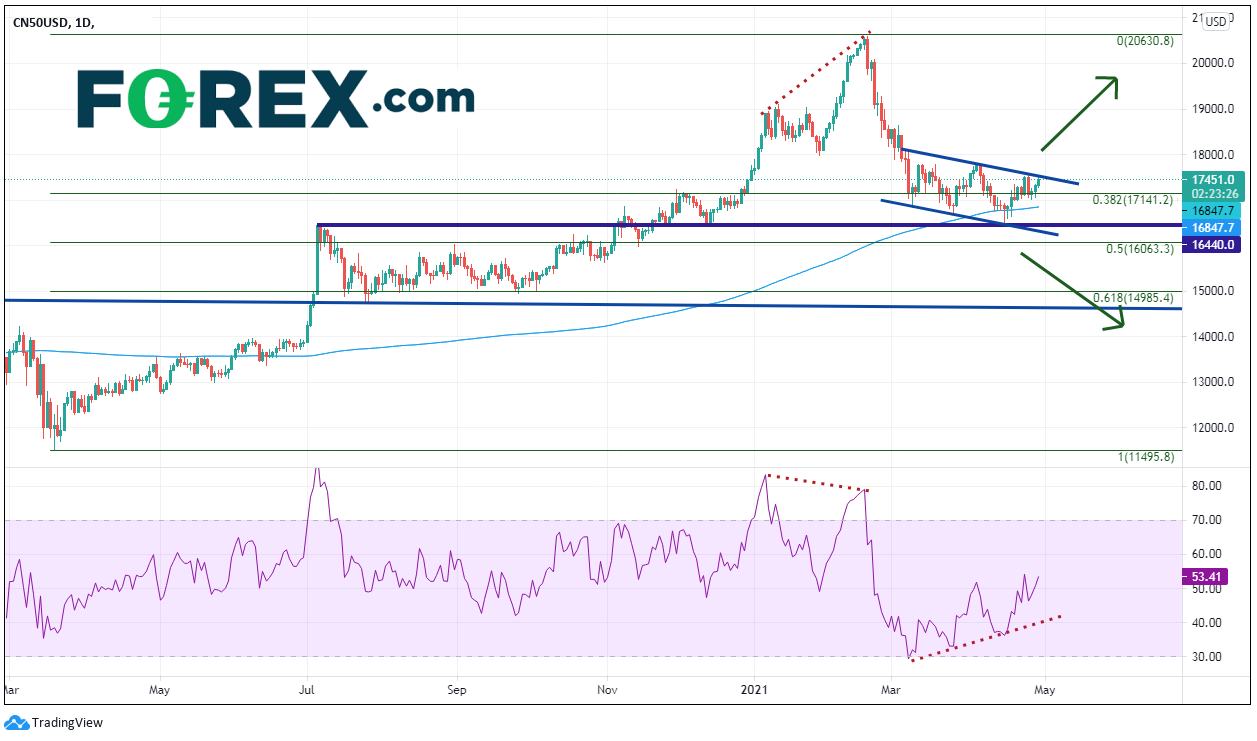 However, over the course of the last month, the index has been moving in a slight downward sloping channel and has put in 3 lower lows while the RSI has put in 3 higher lows.  The 200 Day Moving Average, which is currently 16,847, is creeping higher as price brushes against the top trendline of the channel.  Between April 13th and April 19th, the China A50 traded below the 200 Day Moving Average several times, however failed to close below it each time!  It also held horizontal support from early July 2020 near that some level.  Is now the time for the index to break above the downward sloping trendline and move back towards the February highs?

Over the course of the next week, China will release Manufacturing and Services PMIs, Trade Balance, CPI and PPI.  All economic data is forecasted to be better than March’s data.  If it comes out better than expected, bulls may be looking to push the China A50 above the channel trendline, which is at Thursday’s highs of 17,528.5.

On a 240-minute timeframe, the move higher off the bottom trendline on April 15th has created a nice short-term channel of its own.  The next resistance level is at the top trendline of the shorter-term channel, which confluences with horizontal resistance near 17,791. Above there is the psychological round number resistance at 18,000, and then the 38.2% Fibonacci retracement level from the February 18th highs to the April 15th lows near 18,604.  The first level of support is at the bottom trendline near 17,200. Next support is the psychological round number level and horizontal support near 17,000.  If price breaks lower, the 200 Day Moving Average is at 16,847.

Price could break higher above the trendline channel for any number of reasons, including the economic data to be released over the next week.  If it does, price may move aggressively higher.  However, if price fails and moves lower, there are several near-term support levels where bulls could be waiting to bring the China A50 higher.