Is USDHKD Nearing its 2015 EURCHF Moment

Are FX traders ignoring the pair that may be most impacted by the ongoing Hong Kong protests?

As my colleagues have mentioned in recent days (see here), the ongoing protests in Hong Kong are reaching a critical level, with major implications for essentially every global market.

For the second straight day, flights out of Hong Kong have been suspended while Chinese military forces gather in nearby Shenzen. The continued shutdown of the global financial hub and the potential for further escalation raises the risk of a severe economic disruption in the region. It also limits Chinese leaders’ bandwidth to focus on the escalating trade war with the US, explaining some of the broader market implications.

But are FX traders ignoring the pair that may be most impacted by the ongoing Hong Kong protests?

For over 25 years now, the Hong Kong dollar has been pegged to the US dollar. Its current trading band, between HK$7.75 and HK$7.85, has been in place since May 2005 and has never been broken or even severely tested. Given the Hong Kong Monetary Authority’s (HKMA) massive war chest of reserves and exchange fund bills, investors have had little reason to question the stability of the peg…until now. 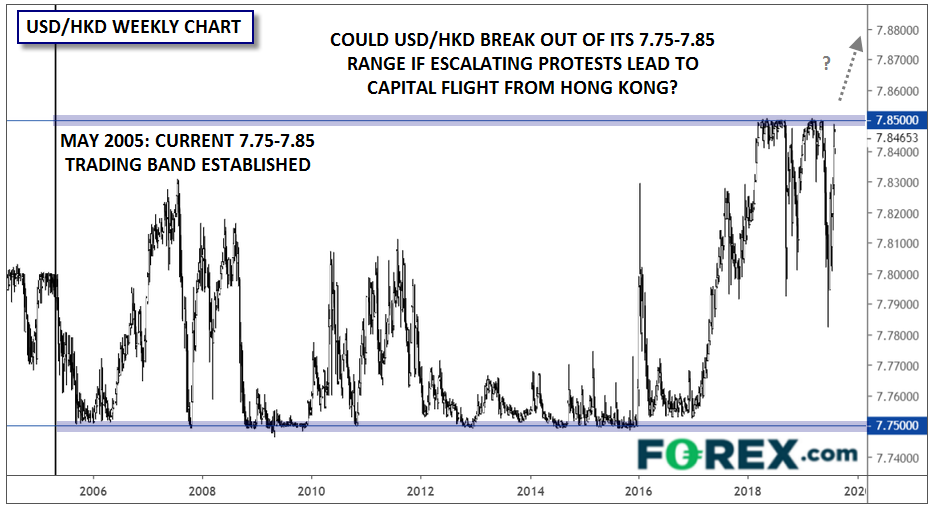 Now, the ongoing turmoil and risk of military intervention by the People’s Liberation Army (PLA) is prompting Hong Kong residents and firms to consider moving capital out of the region. This selling pressure forces the HKMA to buy Hong Kong dollars to defend the peg, depleting its reserves. If the situation continues to escalate and capital outflows accelerate, the central bank may eventually be forced to drop its peg, which could lead to a dramatic weakening in the HKD (surge in XXX/HKD).

FX traders need not look back too far for a rough (if inverse) analog: after prohibiting EUR/CHF from dropping below 1.20 for over three years, massive capital inflows forced the Swiss National Bank to abandon the cap on the value of the Swiss franc in January 2015, leading to an immediate 20% surge in the CHF. The moral of the story is that massive market flows into or out of a region can overwhelm even the most well-capitalized of central banks.

Of course, the peg appears stable for the moment, and the HKMA still has plenty of reserves to deploy as needed. But much like the EUR/CHF situation from a few years ago, traders should consider all scenarios and evaluate whether a speculative position in USD/HKD, an asymmetric risk/reward position with a geopolitical catalyst, may make sense.