A busy week for economic data will start tonight when Statistics New Zealand releases the nation’s third quarter inflation figures. The Consumer Price Index (CPI) is expected to have risen by 0.4% quarter-over-quarter.

A busy week for economic data will start tonight when Statistics New Zealand releases the nation’s third quarter inflation figures. The Consumer Price Index (CPI) is expected to have risen by 0.4% quarter-over-quarter. If correct, this would be an improvement from Q2 when CPI had remained flat, though it would still be a much smaller increase compared to the 1% rise in Q1. Depending on the outcome of CPI, we could see a sharp move in the New Zealand dollar. The data will obviously have to deviate from expectations by a sizeable margin if were to see that sharp movement, though even if it matches forecasts we think that the NZD would rise rather than fall. There will be additional data later on in the day on Tuesday when GDT’s closely-watched Price Index is published. This fortnightly-released index measures the weighted-average price of the 9 dairy products sold at the auction. Previously, the index had shown an unexpected 2.4% drop. Any improvement this time could support the NZD. Changes in dairy prices are very important for the New Zealand economy given that milk, meat, wool and wood products and fish are among its main exports.

From a technical standpoint, the NZD/USD’s near-term direction is not too clear at this stage, although the fact that it has managed to bounce nicely off key support in the 0.7050-7085 range last week is bullish in the short-term. This area was previously resistance and comes in between the 61.8 and 78.6 percent Fibonacci retracement levels. As a result of that bounce, the kiwi has also managed to break back above the 200-day moving average and short-term resistance in the 0.7145-65 area. But with the kiwi already putting in a lower high and a couple of lower lows, it is not clear yet if this is the start of another impulsive up move rather than a corrective downswing. So one needs to proceed with a higher degree of caution at this stage when trying to form a directional bias. As things stand, the short-term bias would remain bullish for as long as price holds above 0.7145-65 support now. Even if price breaks below here, the slightly longer term bias would still remain bullish above the previously mentioned 0.7050-85 range. However, any breakdown below these two key ranges would be considered bearish for their respective time frames. The next levels of potential resistance come in at 0.7205 followed by 0.7280, levels which were formerly support. 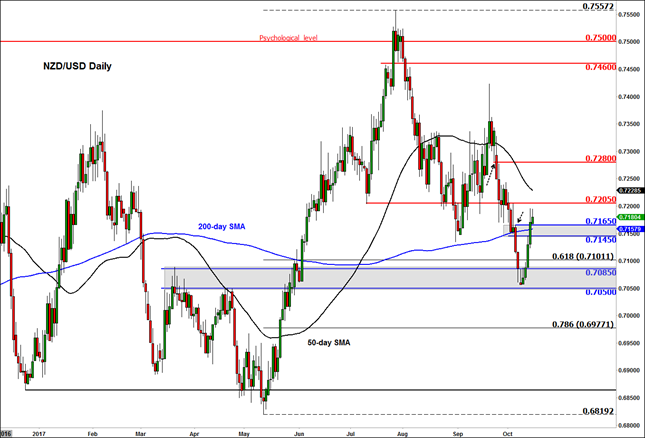