At the start of a week full of US earnings, important economic data and a couple of central bank meetings, risk is somewhat off the menu. Equities, copper and, to a lesser degree, oil prices were all trading lower at the time of this writing. In FX, the major pairs had made little progress and were trading mixed with the Aussie and Loonie, for example, being lower and Kiwi higher. Meanwhile the euro was attempting to climb back above 1.10 against the US dollar after dipping to a new multi-month low of 1.0965 overnight

At the start of a week full of US earnings, important economic data and a couple of central bank meetings, risk is somewhat off the menu.  Equities, copper and, to a lesser degree, oil prices were all trading lower at the time of this writing. In FX, the major pairs had made little progress and were trading mixed with the Aussie and Loonie, for example, being lower and Kiwi higher. Meanwhile the euro was attempting to climb back above 1.10 against the US dollar after dipping to a new multi-month low of 1.0965 overnight. The euro was finding some support on the back of news that consumer price inflation in the Eurozone had hit its highest level since 2014 last month.  Eurostat’s final inflation readings confirmed headline CPI rose at a 0.4% year-on-year pace in September, up from 0.2%, in August, while core CPI was up 0.8 per cent year-over-year.

FX pairs to watch this week

Although Eurozone data is going to be light for the rest of this week, it could be an important week for the euro nonetheless considering we have the European Central Bank meeting on Thursday. Any talk of tapering QE could send the currency soaring higher, while dovish rhetoric from the ECB president Mario Draghi could have the opposite impact. We will also have important data from Australia, China, the UK and US to look forward to as well. Thus, for the major FX pairs, the likes of the AUD/USD, EUR/USD and GBP/USD should be the most interesting ones to watch, while FX crosses like the EUR/AUD, EUR/GBP and GBP/AUD will also face massive tests this week.

China will remain in focus after it delivered upbeat inflation data but disappointing trade figures last week, with the latter showing bigger-than-expected drops in imports and exports. Given that China is Australia’s largest trading partner, you would have thought that this would weigh on the Aussie. Yet, the AUD/USD was able to march higher at the end of last week, which points to AUD strength. There are plenty of macro events this week that could make the Aussie move more profoundly in one or the other direction. The Reserve Bank of Australia’s last policy meeting minutes will be released on Tuesday. Then on Wednesday, Australia’s treasury will publish its mid-year economic and fiscal outlook, which will include updated growth forecasts. The always-important Australian employment figures will be released a day later on Thursday. We have all that to look forward to. But there is more: China will be releasing some important economic pointers of its own, including GDP and industrial production figures on Wednesday. If last week’s trade figures are anything to go by then China’s economic figures this week could disappoint expectations and potentially cause the Aussie dollar to slump. Obviously the Aussie could climb further higher should the outcome of the above macro events turn out to be more favourable than expected.

EUR/AUD chipping away at critical support

Ahead of those macro events, the AUD/USD is testing the resistance trend of its long-term bearish channel, so it will either move sharply higher or lower depending on what price does next. Likewise, the EUR/AUD is currently testing a major support zone in the 1.4360-1.4480 area. It too could bounce strongly or drop viciously, depending in part to the outcome of the economic data discussed above. But with the trend being bearish for the EUR/USD, a breakdown of support looks the more likely outcome. Conservative traders may wish to wait for the ERU/AUD to potentially break below its support area before taking a view, or alternatively fade the bounces near key resistance levels. A couple of resistance levels that need to be watched closely are around 1.4540 and then 1.4665. If the EUR/AUD were to move above the latter then this would invalidate our short-term bearish view and we could see a larger counter-trend move higher. However if the 1.4360 support level breaks down first then a drop to the Fibonacci extension levels at 1.4230 (127.2%) or 1.4000 (161.8%) could be the next objectives the bears could aim for. 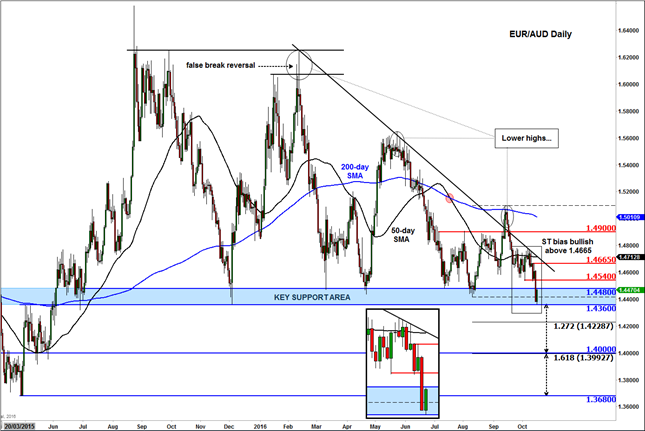