The markets were a little calmer in the first half of today’s session as the Turkish lira finally stopped falling, while the pound staged a short-lived bounce in the aftermath of mixed-bag UK data.

The markets were a little calmer in the first half of today’s session as the Turkish lira finally stopped falling, while the pound staged a short-lived bounce in the aftermath of mixed-bag UK data. The dollar was little-changed, rising most notably against the yen thanks to the slight reduction in risk aversion. Stocks rebounded but were again coming under pressure at the time of writing. Oil prices rose but gold and silver remained near yesterday’s lows following their big slide.

Turkey jitter calmer but could flare up again

The Turkish lira has finally found some support after two days of intense selling that triggered panic across the markets. The beleaguered currency bounced back 6%, nearly making good its losses from the day before. But it has a long way to go following its 13% or so drop on Friday and its previous declines. For now though, the slightly calmer situation has helped to boost sentiment a little. Turkey’s benchmark BIST 100 index was up more than 2% as banks staged a relief rally. Other emerging market currencies including the South African rand and Mexican peso also rebound. However, the situation remains unstable and there was no sign of Turkey backing away from its ongoing confrontation with the US.  President Recep Tayyip Erdogan has urged its citizens to boycott Apple’s iPhone and other US products in retaliation for US sanctions against Turkey.

Meanwhile, the latest set of UK data releases was mixed and the pound was unable to hold onto its gains. Wages grew at a slower pace during the three months to the end of June, but there was a surprise fall in the jobless rate which reached its lowest level since 1975. Total pay was 2.4% higher than the same period a year ago, but it was slower than the previous month’s 2.5% reading and also below expectations. With consumer inflation also being at 2.5% in June, real wages were therefore flat. Excluding bonuses, wages grew by 2.7%, which was in line with the expectations. The employment picture improved further as the number of people in work increase and the unemployment rate dropped surprising to just 4.0% compared to an unchanged figure of 4.2% expected. However, jobless claims rose by 6,200 applications in July, more than 2,300 expected.

Eurozone data fared better as GDP at 0.4% was slightly better than expected in the second quarter, and up from 0.3% recorded in Q3. The German economy expanded 0.5% which was also better than estimates. Meanwhile, a leading survey of financial professionals in Germany showed respondents were more optimistic than expected in August. The ZEW economic sentiment came in at -13.7, which was not only above expectations of -20.7 but significantly higher than the -24.7 recorded in July.

Not much on the agenda until UK CPI Wednesday

Looking ahead, there’ not a lot on the economic calendar today, so at least from a data point of view the second half of today’s session could be quieter. The next important data release is UK’s Consumer Price Index (CPI) measure of inflation, due on Wednesday morning. Wednesday will also see the release of US retail sales among a handful other macro pointers from the world’s largest economy. But make no mistake about it, Turkey and emerging markets will remain be the main focus points. 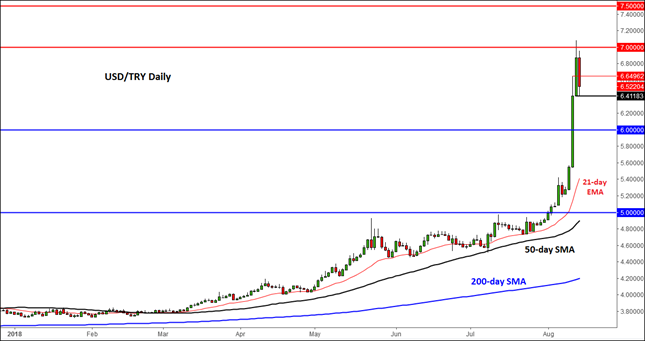