Marijuana Stocks Not Getting Investors High Ahead of Earnings

After growing like a weed last year, marijuana stocks have gone up in smoke so far in 2019.

After growing like a weed last year, marijuana stocks have gone up in smoke so far in 2019.

Excusing the puns, it’s been a brutal couple of quarters for Canadian marijuana stocks. After last year’s surging interest in the nascent industry, investors’ expectations were impossibly high; as the reality of selling an easy-to-grow plant (it’s called “weed” for a reason!) in a heavily-regulated industry sunk in, traders have become increasingly disillusioned with the outlook for these firms, many of which have yet to reach profitability. 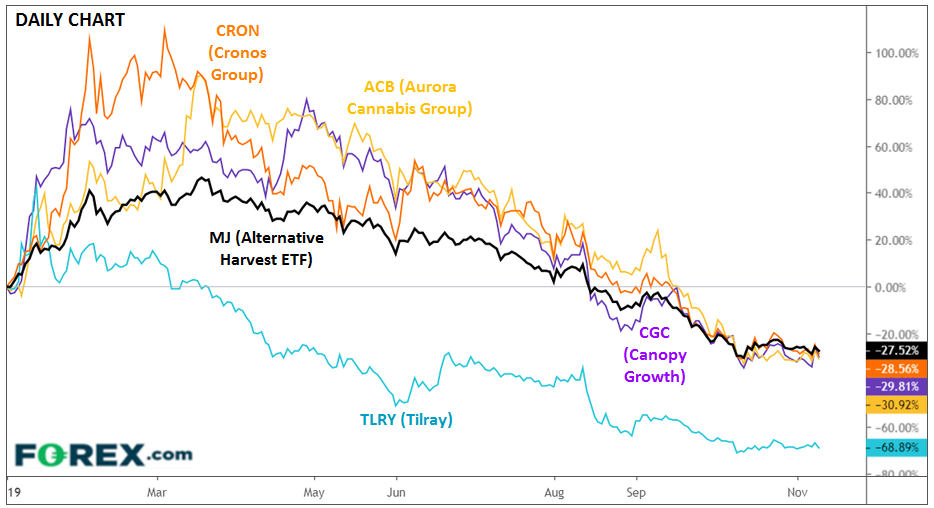 That said, the potential market remains compelling and valuations for industry bellwethers are at 2-year lows, leading the investment bank Cantor Fitzgerald to come out bullish on the sector last week. One catalyst that could boost leading marijuana stocks as they report earnings this week is heavy short positioning, which could lead to classic “short squeeze” setups on better-than-expected results in the following firms:

Below, we highlight some key factors to watch as each of these firms report earnings this week:

While Cronos has a relatively small footprint compared to its peers, with minimal presence even in domestic provinces like Quebec and Alberta, it has benefitted from a massive $1.8B investment from Altria Group. The firm just reported -$0.02 in EPS, beating estimates of a -$0.03 loss, though revenues came in lighter than expected at $10.1M. Traders are nonplussed at first glance, with the stock trading down -3% in early trade today.

Given the firm’s small footprint and major corporate backer, CRON represents one of the highest upside plays in the sector moving forward, albeit with substantial risk as it tries to overcome rivals’ early mover advantages.

Tilray garnered top billing around this time last year when the stock surged from around $20 to peak near $300 in about five weeks. Since that mini-bubble though, Tilray has been the worst performing stock in the sector, completing its round trip back to $20 last month. Looking ahead to this afternoon’s earnings report, the key factor to watch will be inventories, which are expected to remain elevated, especially for retail clients. Analysts are expecting a -$0.30 loss per share on sales of $49M.

Aurora was one of the first movers among Canadian cannabis firms, but the company has yet to reach profitability. The firm had initially sought to get into the black in the fourth quarter, but that goal looks increasingly remote as new entrants have increased the supply (and therefore driven down the price) of the commodity. Analysts are looking for a loss of -$0.05 per share on revenues of $90M in Thursday afternoon’s earnings report.

The world’s largest marijuana company by market capitalization may be best positioned heading into this week’s earnings reports. Rival CannTrust Holdings halted all sales after it was revealed to be growing in unlicensed rooms, potentially opening the door for Canopy Growth to capitalize on medical patients looking for a new provider. For the CGC mothership, analysts are looking for a loss of -$0.41 per share on $101.5M in sales Thursday morning, but it will also be worth watching results from Acreage Holdings this afternoon, which CGC has the right to buy if marijuana is fully legalized in the US.

With these industry leaders (and a swath of second-tier producers) all reporting this week, traders will soon have a better idea on whether the industry is poised for a second phase of “weed-like” growth or whether the current downtrend will extend into 2020.