Market Review & Outlook: All Eyes on the Fed/BoJ Interplay

Next week, however, does not solely feature the Fed. The Bank of Japan (BoJ) will also be meeting and issuing its own highly-anticipated monetary policy statement that could also act as a significant market-mover, depending on which policy path the BoJ ultimately chooses. The interplay of this path with that of the Fed, both of which will be revealed on the same day next week – Wednesday, September 21 – has the potential to prompt sharp market moves, most notably for USD/JPY, gold, and global equity markets.

As for the Fed, the market’s view of the probability of a Fed rate hike next week continues to be exceptionally low at around 15%. However, key Fed speakers in recent weeks have given mixed messages with respect to the Fed’s position and perspective. Some have argued for a sooner rate hike, even citing the distinct possibility of one occurring in September, while others have been more dovish. The latter includes the last speaker before next week’s FOMC meeting, the characteristically dovish Fed Governor Lael Brainard. who cautioned on Monday against raising interest rates too quickly.

Additionally, September has thus far seen a general deterioration of US economic data in the form of substantially worse-than-expected releases regarding employment (NFP) and both the manufacturing and services industries (PMI), that have significantly lowered the market’s expectations for a September rate hike. Most recently, a plethora of US economic data was just released on Thursday, mostly worse than expected, which generally did not bode well for the prospects of a US rate hike by an already skittish Fed. Most notably, retail sales, core retail sales, the Producer Price Index, and industrial production were all significantly lower than expected.

Complicating matters somewhat, however, was Friday’s closely-watched Consumer Price Index (CPI) reading for August, which showed that both headline and core (excluding food and energy) prices increased by more than expected. Headline CPI rose by 0.2% versus the 0.1% expected, while the core data rose by 0.3% against the 0.2% forecast. Despite this slightly more buoyant view of inflation, however, it is still unlikely to be enough to sway the Fed into action next week.

As for the BoJ, reports last week that Japan’s central bank was considering more monetary easing and cutting rates further into negative territory initially weighed on the yen. Since then, however, markets have been a bit more skeptical that the BoJ will actually act this time around. Rhetoric surrounding policy easing intentions from Japan has been ongoing for quite some time as the yen has continuously strengthened, much to the consternation of Japanese officials. In addition, there has been speculation that the BoJ may have already begun to exhaust its stimulus options. Finally, there is also suspicion that even if the BoJ does in fact act next week, any such easing actions may fail or be only temporary in accomplishing the desired effect of weakening the yen.

Though the BoJ is fairly more likely to surprise the markets next week than the Fed, a somewhat higher probability outcome is that both the Fed and BoJ will leave interest rates and monetary policy largely unchanged. If this is indeed the actual outcome, there should be some renewed pressure on the US dollar and further strengthening of the Japanese yen, which could potentially lead to an extension of the entrenched downtrend for USD/JPY. At the same time, gold could finally get a boost while equity markets could stabilize after a marked rise in volatility within the past week.

USD/JPY has been trading just under the critical 103.00 technical resistance level this entire past week, remaining in a tight consolidation range ahead of next week's Fed and BoJ meetings. This resistance area is also at a clear downtrend resistance line extending back from May’s 111.00-area highs. If the currency pair continues to respect this resistance and falls further, especially on unchanged central bank stances next week, the key downside target continues to reside at the major 100.00 psychological support level. Any further fall below 100.00 could go on to extend the long-term, well-entrenched downtrend for USD/JPY, with the next major downside target at the 97.00 support level. 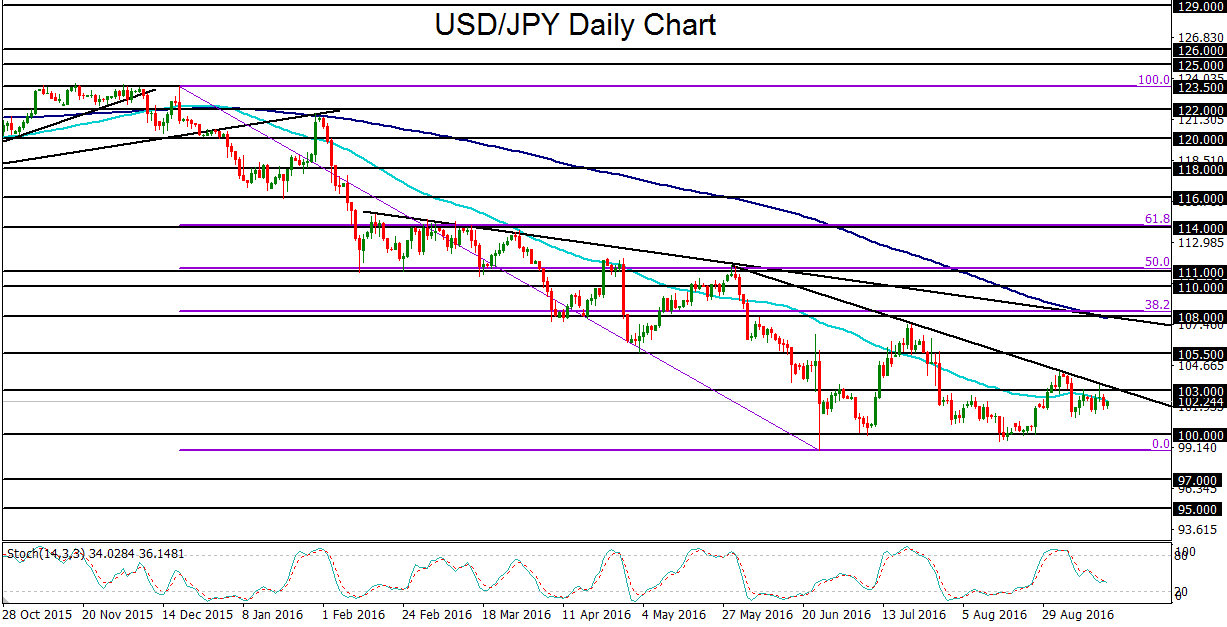