Markets still choppy and directionless ahead of Jackson Hole

It is not always when one calls London session boring, but this morning wasn’t fun at all. It was like watching paint dry. There was minimal movements in stock indices, commodities, bonds and FX markets. Hopefully the second half of today’s session will be better.

It is not always when one calls London session boring, but this morning wasn’t fun at all. It was like watching paint dry. There was minimal movements in stock indices, commodities, bonds and FX markets. Hopefully the second half of today’s session will be better. But this range-bound and choppy price action has been a dominant theme for much of the summer, at least by the London open standards. The lack of any real follow through in momentum must be very frustrating for swing and position traders, but day traders and scalpers should be enjoying this. The good news is September is just around the corner now when volatility tends to pick up. The bad news is the summer is ending – not that it was much of a summer in the UK, mind you!

Despite this being a quiet session so far, we have seen the pound fall below 1.28 against the US dollar while the euro strengthened thanks to the Eurozone flash PMI data, which were mostly stronger than expected. The data helped to boost expectations about tighter monetary conditions in the single current bloc. Consequently, the EUR/GBP rose to not only a new 2017 high but to an eight year high of above 0.9200. The EUR/USD also climbed higher but with the US dollar making a bit of a comeback in recent days the gains for this pair were limited.

Meanwhile European stock indices failed to maintain the bullish momentum from yesterday when Wall Street had one of its best days so far in the year. But at the same time they didn’t exactly fall off a cliff either. Stock market participants are probably waiting for Wall Street to open again for direction.

In commodities, crude oil was little changed ahead of this afternoon’s release of US oil inventories data. Gold was kind of hanging in there before this Jackson Hole meeting. The precious metal is in a wait-and-see mode but we should have a better idea of direction by the end of this week. One can make an argument for a bearish view on gold as this stage. If the dollar were to come back due to short covering and given the rally in US stocks we saw yesterday, the buck-denominated and safe haven metal could fall out of favour. In addition to these fundamental factors, the failed breakout attempt above $1295 is also bearish from a technical perspective. Only when gold closes above this level will the bullish view re-establish. 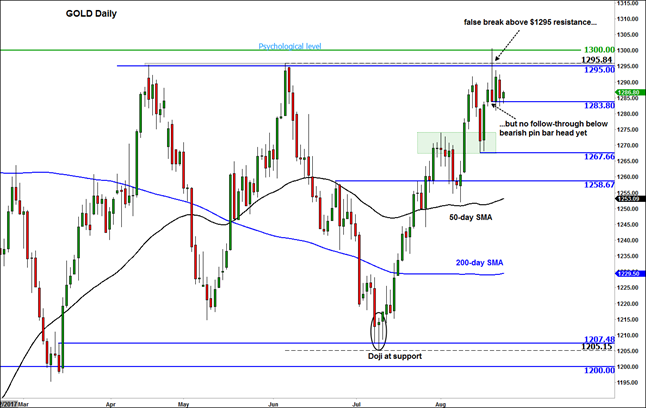