Today’s latest macro data has painted a mixed picture about the health of the global economy, causing stocks to fall in Asia overnight with Europe also starting on the back foot, although here the major indices were bouncing off their lows at the time of writing.

Today’s latest macro data has painted a mixed picture about the health of the global economy, causing stocks to fall in Asia overnight with Europe also starting on the back foot, although here the major indices were bouncing off their lows at the time of writing. It comes after the latest Purchasing Managers’ Indices (PMIs) from China’s manufacturing and services sectors disappointed expectations, casting fresh doubts over the world’s second largest economy. However, there was some positive news out of the Eurozone, where the economy expanded at a slightly faster pace than expected. Consequently, the EUR/USD has further extended its gains following yesterday’s rebound, although it was testing a key resistance level around the 1.12 area.

Eurozone GDP expanded at a slightly faster pace of 0.4% in Q1, better than 0.3% expected and 0.2% in Q4, alleviating fears over a recession. On a country level, French GDP expanded by 0.3% as expected while Spanish GDP grew by 0.7%, better than 0.6% expected. Meanwhile, today’s other Eurozone data was mixed:

EUR/AUD one to watch

As a result of the mostly positive Eurozone data, the euro has been underpinned while the negative Chinese figures have undermined the likes of the Aussie. Consequently, the EUR/AUD has risen, but it remains to be seen whether it can now push higher from here and take out the 200-day moving average resistance. It has created a couple of bullish signals already, most notably breaking its bearish trend line. But it still needs to show further bullish price action for us to turn decidedly on this pair. Indeed, a potential break back below the recent support at 1.5810 would tip the balance back in the bears’ favour. 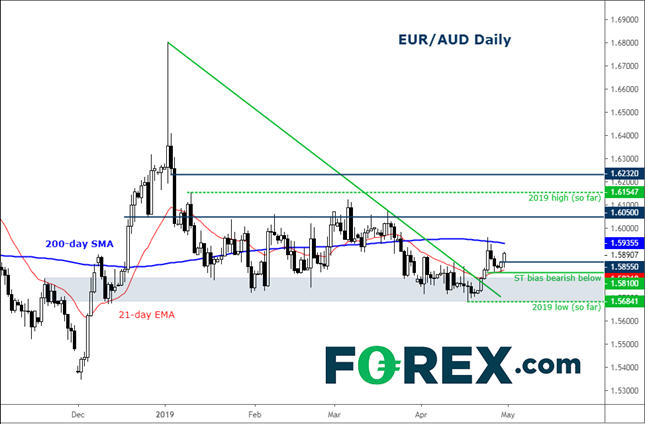