Morrisons earnings preview: what to expect from its annual results

Morrisons shares will be in focus later this week when it releases its latest set of annual results, with markets expecting the supermarket chain to post a steep fall in profits as it books large costs adapting to the coronavirus crisis.

When will Morrisons release its annual results?

Morrisons will release preliminary results for the financial year to early February on March 11 at 0700 GMT.

Morrisons earnings consensus: what to expect

Supermarkets have been one of the few types of stores that have been able to remain open during the pandemic and spending has remained resilient. But it has also caused an exponential rise in costs as stores introduce extra safety measures, hire more staff and deal with workers who need time off to isolate.

That has placed the industry in a difficult position. On the one hand, the industry has felt obliged to return some of the support, such as business rates relief, it has received from the government because they have been able to stay open. On the other, supermarkets have seen their profitability squeezed. On top of the costs related directly to the pandemic, supermarkets have had to spend big to rapidly expand their online and delivery capabilities, respond to changing shopping habits and on preparing for Brexit.

This will weigh on Morrisons when it releases its annual results. Not only is it expecting to book £280 million worth of Covid-19 costs, but it has decided to repay £230 million worth of business rates relief.

Morrisons has said it will deliver pretax profit before exceptionals of £420 million to £440 million. This does not take the repayment of business rates relief into account. This should be watched closely as the company has warned the unpredictable outlook makes providing ‘precise guidance difficult’.

Morrisons has been adapting to the huge changes that the pandemic has thrown at it. It has had to grow its online service to serve people stuck at home and has made it profitable. It has also found new distribution channels by partnering up with the likes of Amazon and Deliveroo. And its wholesale business has also continued to grow both top and bottom lines, driven by its supply deals with convenience stores like McColls, which are being gradually converted into Morrisons Daily’s formats.

Investors will want to see Morrisons continue to capitalise on these areas of the business to ensure it has new growth avenues to pursue once things start to return to normal.

Will Morrisons pay a special dividend?

The dividend will also be closely watched. The company raised its interim dividend by 5.7% to 2.04 pence from 1.93 pence the year before, and it paid out a 4.0p special payout in January that had been deferred from the last financial year, implying it is confident about distributing cash in the current climate.

The total dividend in the last financial year was 8.77p, made up of a 6.77p ordinary dividend and a 2.0p special payout. Morrisons said it would review its ability to pay a special dividend when it releases its results.

Morrison has been trading within a range of 18p since the start of the year. The holding pattern is capped in the upside by 186p and the lower band at 168p. Morrison share price trades towards the lower end of the horizontal channel.

The stock trades below its 50 and 100 sma which are flat, and the RSI is also showing a neutral bias at 50.

Traders may look to wait for fresh impetus from the results before taking a position. The bears should be looking for a break-out below 168p which could signal the start of a deeper sell off towards 161 the November 2020 low.

Upbeat results from Morrison could spark the bulls into action. Any recovery would need to push above resistance at 175 and 177 the 100 and 50 sma respectively. A break above those levels could spark more bullish momentum and bring 186p the upper band into target. 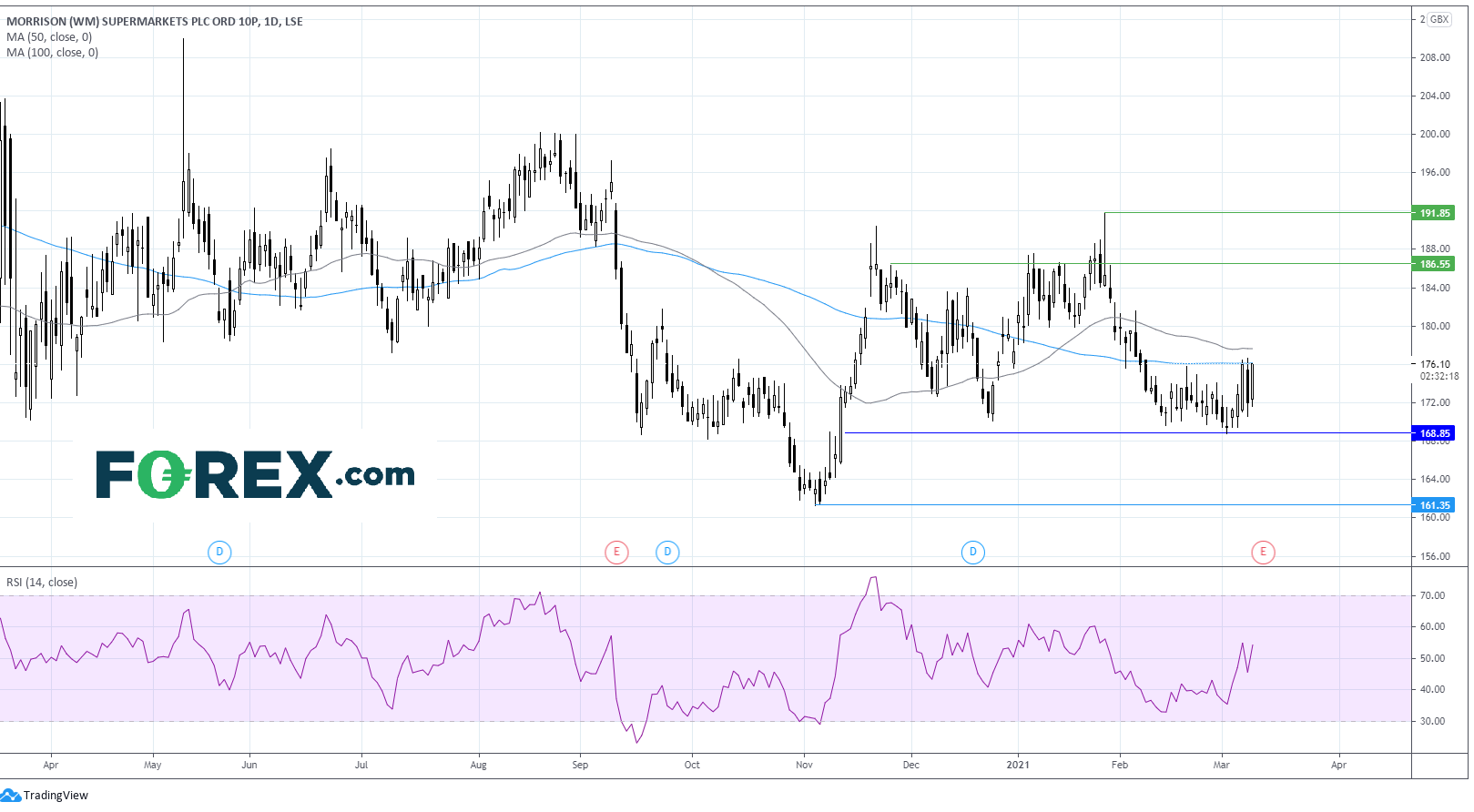 How to trade Morrisons shares

You can trade Morrisons shares with Forex.com. Follow these easy steps to start trading the opportunities the stock has to offer.