Like a bridesmaid announcing she’s pregnant at the wedding, Fed Chairman Powell may have upstaged the NFP report....

Like a bridesmaid announcing she’s pregnant at the wedding, Fed Chairman Powell may have upstaged the NFP report by stating that it would take a “material reassessment” of the central bank’s outlook for the economy to cut interest rates again…and that it would take a “significant rise” in inflation to start raising interest rates. In other words, there’s a high bar to changing Fed policy from neutral any time soon, and with that transmission mechanism busted, the NFP report may lead to less volatility than normal.

In addition to the potential for a quieter market reaction than normal, two of our four most reliable “leading” indicators for the jobs report (the ISM Manufacturing and Non-Manufacturing Surveys) will be released after tomorrow’s jobs report. The two other leading indicators printed as follows:

The ADP Employment report dropped to 125k, meeting estimates, though the previous month’s report was revised down to just 93k.

Both of these leading indicators have taken a turn for the worse, and there’s one more big bearish factor at play in this month’s reading: the United Auto Workers strike at General Motors. The strike (which was just resolved last week) impacted 46,000 workers across 55 facilities in 10 states, raising the likelihood of a sub-100k reading in Non-Farm Payrolls for only the third time in the last two years. 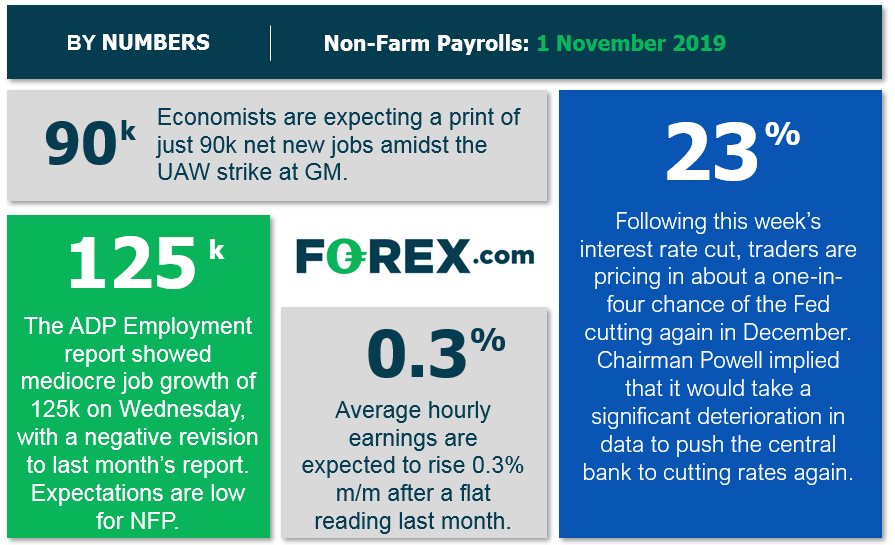 In the event the jobs and the wage data beat expectations, then we would favor looking for short-term bullish trades in USD/CAD, which has seen a significant bounce on the back of weak oil prices and a dovish Bank of Canada press conference. But if the jobs data misses expectations, then we would favor looking for bearish setups on the dollar against the yen, which is turning lower off key resistance in the 109.00 area.