NFP Preview What to Expect from the Final PreElection Jobs Report

Like everything else these days, this month’s jobs report will be viewed primarily through a political lens as we finally enter the home stretch of the multi-year US Presidential campaign season.

Like everything else these days, this month’s jobs report will be viewed primarily through a political lens as we finally enter the home stretch of the multi-year US Presidential campaign season. Academic studies have repeatedly shown that the state of the economy can have a major influence on voting intentions, and with another round of fiscal stimulus unlikely to hit consumers’ wallets before the election (if ever!), this final pre-election jobs report will be perhaps the single most important economic release heading into November 3rd.

As it stands, economists expect that this month’s NFP report will show roughly 900K net new jobs, which would be the first figure below 1M jobs since the catastrophic -21M jobs reading in April. Meanwhile, The Street’s consensus expectations are for average hourly earnings to rise 0.5% m/m and the unemployment rate to dip to 8.2%. 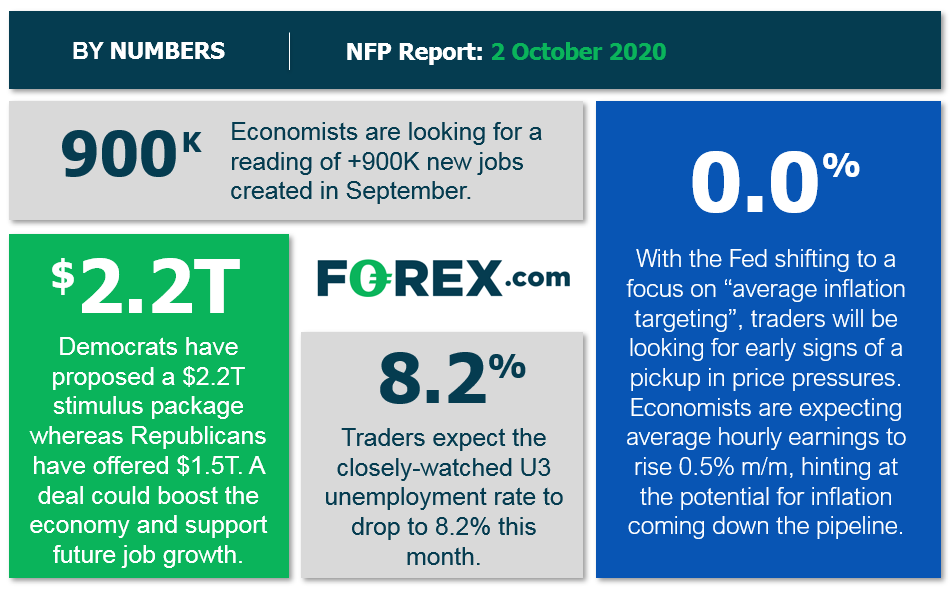 As regular readers know, there are four historically reliable leading indicators that we watch to help handicap each month’s NFP report, but due to a calendar quirk, the ISM Non-Manufacturing PMI report won’t be released until Monday. That leaves us with the following indicators to watch:

As we’ve noted repeatedly over the last few months, traders should take any forward-looking economic estimates with a massive grain of salt given the truly unparalleled global economic disruption as a result of COVID-19’s spread. That said, weighing the data and our internal models, the leading indicators point to a potentially worse-than-expected reading from the September NFP report, with headline job growth potentially rising by “just” 600k-800k jobs, though with a bigger band of uncertainty than ever given the current state of affairs.

When it comes to the FX market, the elephant in the room is still the US dollar. The greenback has generally stabilized against its major rivals over the past couple months after a big swoon through the summer, and with this month’s jobs report and the final stretch of the campaign on tap, the next month or so will be critical to “set the tone” for the rest of the year.

For this month’s report, if we see stronger than expected jobs growth and wage figures, readers may want to consider sell opportunities in EUR/USD, which has retraced back to previous-support-turned-resistance in the 1.1750 area after rolling over last month. Meanwhile, with USD/JPY unable to break above it’s downward-trending 50-day EMA, a weaker-than-anticipated NFP reading could be the catalyst for the general downtrend in that pair to resume.