NFP Preview: Will the Blowout ADP Reading Translate into NFP?

The data points to a potentially stronger-than-expected jobs report...

While Jerome Powell and company ostensibly maintained their neutral outlook at last week’s monetary policy meeting, the Federal Reserve Chairman did hint at a mild dovish shift within the committee. By emphasizing that the Fed is determined to avoid a prolonged period of low inflation, Powell cracked the door open for a potential interest rate cut later this year. Accordingly, fed funds futures traders have started to price in that possibility, with the market now pricing in about a one-in-three probability of a rate cut by June (33%) and a three-in-four (77%) chance of at least one rate cut by the end of the year, according to the CME’s FedWatch tool.

Against this backdrop, the market may be more sensitive to a soft employment report, which could pull forward the timeline on a potential interest rate reduction, than a stronger reading. That said, this effect may be somewhat muted by the fact that we have another NFP report early next month before the Fed reconvenes to discuss the economy and monetary policy again.

From our perspective, there have been four historically reliable leading indicators for the NFP report:

In other words, the leading indicators are generally positive this month, with three improving (including the truly massive ADP print) and just one deteriorating. At this point, we’d be remiss if we failed to at least mention coronavirus: with the NFP survey taking place in mid-January (and most of the disruption still limited to China in any event), we don’t expect any impact on tomorrow’s jobs report from the virus outbreak. Weighing these factors and our internal models, the data points to a potentially stronger-than-expected jobs report, with headline job growth in the 170k-210k range. 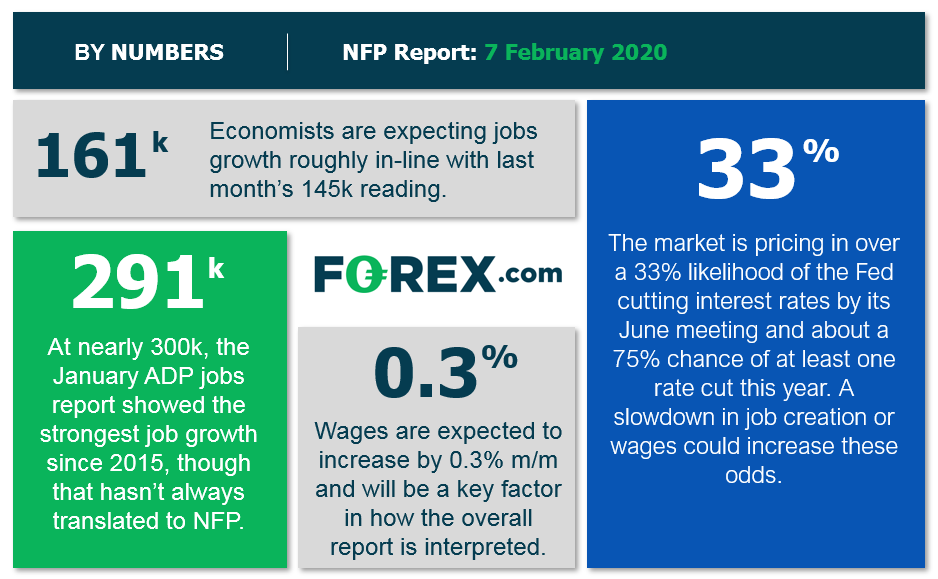 In the event the jobs and the wage data beat expectations, then we would favor looking for short-term bearish trades in EUR/USD, which has just broken to a multi-month low in line with the longer-term bearish trend. But if the jobs data misses expectations, then we would favor looking for bearish trades in USD/CAD (pending Canadian employment data), which is testing resistance in the lower-1.3300s and may be vulnerable to a pullback after a relentless rally so far this year.