The dollar’s reaction to the latest US jobs report was a typical V-shape move: up first then down as investors realised the nonfarm payrolls report was not as solid as the headline jobs growth suggested.

The dollar’s reaction to the latest US jobs report was a typical V-shape move: up first then down as investors realised the nonfarm payrolls report was not as solid as the headline jobs growth suggested. Similarly, yields initially rose then fell back as bonds rallied. This helped to underpin both stock index futures and gold prices, on perception that this mixed-bag jobs report hasn’t change the outlook for US interest rates materially.

April payrolls rose by a solid 263K, easily beating expectations of around 190K. What’s more employment in February and March were revised up by a combined 16K more than initially reported, pushing the average of jobs gains for the past three months to a cool 169K per month. There was more: the unemployment rate dropped unexpectedly, to 3.6% year-over-year from 3.8% the month before.

But that’s where the good news ended.

The drop in the unemployment rate was due mainly to a rise in people giving up looking for jobs. The labor force participation rate dropped from 63.0% to 62.8%, its lowest level since the 1960s. On top of this, wages growth disappointed expectations: Average Hourly Earnings remained unchanged at 3.2% year-over-year in April compared to 3.3% expected, with the month-over-month reading also disappointing with a 0.2% increase.

Overall, though, this was still a good jobs report and may well help to keep the dollar’s long-term uptrend intact, even if the bulls are happy to take some profit today. Indeed, despite today’s reversal from the highs, the Dollar Index (DXY) remains not too far off its 2019 peak and still above the support levels as can be seen on the chart. We would only turn bearish on DXY if its goes on to break its most recent swing low at 96.75 over the coming days and weeks. 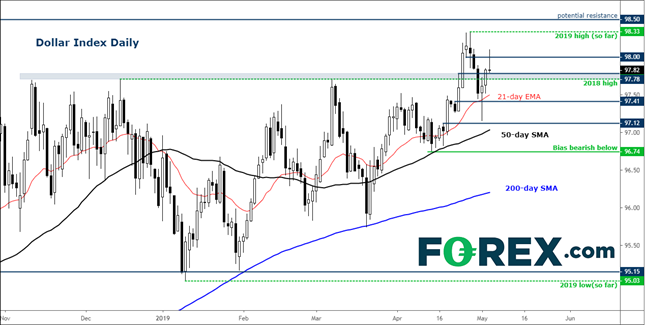