November US PPI comes in hot. Will it matter to the Fed?

Although it had an immediate impact on the markets once it was released, the PPI print alone shouldn’t have too much influence on the FOMC decision.

The US PPI for November released on Friday was hotter than anticipated.  The headline print rose 7.4% YoY vs an expectation of 7.2% YoY.  Despite the miss, this was a large drop from October’s reading of 8.1% YoY.  This was also the fifth consecutive decline for the inflation reading and the lowest since May 2021.  In addition, the Core PPI (which excludes food and energy) was 6.2% YoY vs and expectation of 5.9% YoY and an October reading of 6.7% YoY.  This was the eighth consecutive drop for the Core inflation reading and the lowest since June 2021.

But will the PPI data affect the FOMC’s interest rate decision when it meets on Wednesday?  During Powell’s speech at the Brookings Institute on November 30th, Powell said that “the Fed could slow the pace of rate rises as soon as the December FOMC meeting”.  In addition, he noted that “relying less on forecasts means doing more risk management and slowing down rate rises at this point is a good way to balance the risks of overdoing hikes”.  It appears that Powell was setting up the markets for a decrease in the pace of rate increases at the December meeting.  The Fed has increased the Fed Funds rate by 400bps this year alone so far, having hiked by 75bps at the last four meetings.  Expectations are that the FOMC will increase rates by “only” 50bps next week!

According to the CME Fedwatch Tool, markets are pricing in a 75% chance of a 50bps rate hike at the upcoming meeting, which is little changed from before the PPI data was released.

Upon the release of the PPI data, USD/JPY moved aggressively higher, from 135.68 to 136.68, on hopes that the higher PPI reading would cause the Fed to raise rates by 75bps.  However, the pair pulled back to the middle of the range. 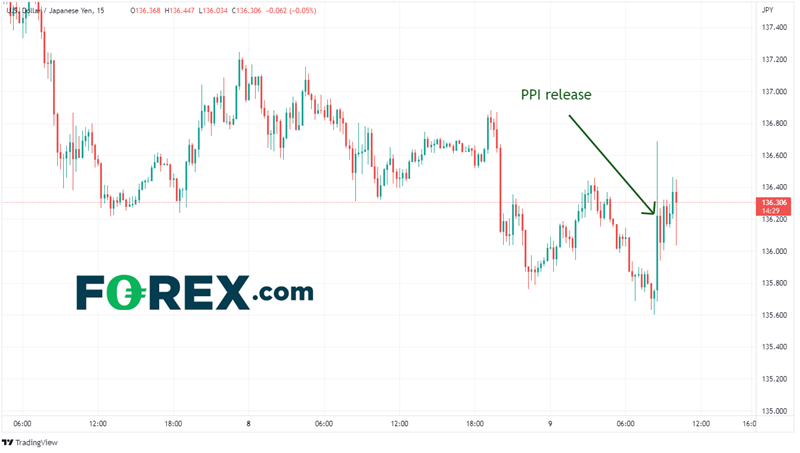 USD/JPY had been moving in an upward sloping channel since March 31st when the pair was trading near 121.79.  As price began moving in the channel, the MOF intervened and bought Yen in the market on September 22nd.  However, USD/JPY continued to move higher.  On October 17th, the pair broke out of the top of the rising channel near 148.86. Four days later, Japan had seen enough and stepped in once again to buy Yen after price had reached as high as 151.95!  This time it worked, as USD/JPY fell to a low print of 146.16.  Since then, USD/JPY has retraced 50% of the move from the lows of March 4th to the highs of October 21st, near 133.29. The 200 Day Moving Average also crosses near that area at 135.03. 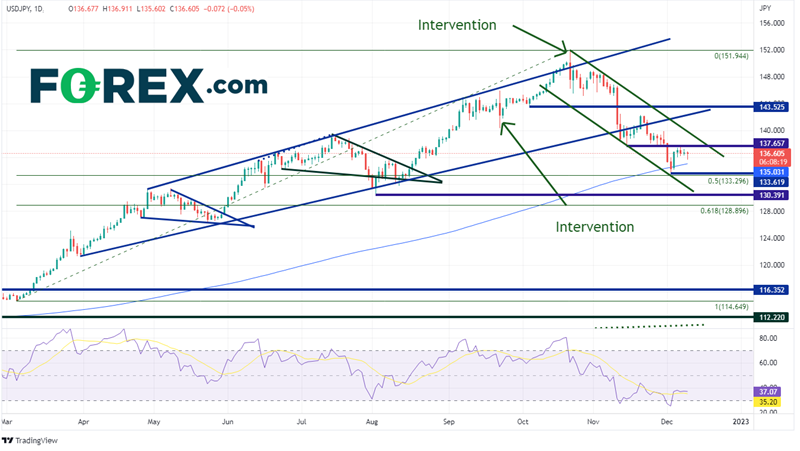 The 200 Day Moving Average/lows of December 2nd/ 50% retracement level now act as support for USD/JPY between 133.29 and 135.03.  If price continues lower, the next support level is at the bottom trendline from the downward sloping channel near 131.50 and then the spike lows from August 2nd at 130.39.  However, if USD/JPY moves higher off the congested support area, the first resistance is at the lows of November 15th at 137.66.  Above there, price can move to the bottom trendline of previous upward sloping channel at 142.15, the horizontal resistance at 143.52.

Will the higher than expected PPI data matter to the Fed when it meets next week?  Although it had an immediate impact on the markets once it was released, the PPI print alone shouldn’t have too much influence on the FOMC decision.  In addition, US CPI will be released on Tuesday, the day before the Fed announcement.  Although it seems as though Powell has already made the decision to hike rates by 50bps, the CPI should have more influence on the Fed and the PPI.