NZ CPI hits a 32-year high, but is it enough for an imminent hike?

Despite another strong inflation report for New Zealand, it was below expectations which leaves traders questioning when (and by how much) RBNZ’s next hike will be.

RBNZ’s OCR (overnight cash rate) sits at 1.5% after they rose by 50-bps last week, which was their most aggressive single hike in 20-years. This means the central bank has increased their cash rate by 125-bps since the record low of 0.25% and have hiked at each of the past four meetings. And this makes us question whether they’ll continue to hike so hard at their next meeting despite such high levels of inflation.

Many economists have 2.5% as their end of year target for the OCR, which leaves room for four 25-bps hikes over the next five meetings. So, looking from this angle it may not be a dead cert that they raise at their next meeting, especially if employment data shows signs of loosening. Thankfully, quarterly employment data arrived in just under two weeks on the 4th of May. And this gives the RBNZ time to mull over the data ahead of their next meeting on the 24th of May.

The 2-month OIS suggests an 84% probability of a 25-bps hike, so at this stage another 50-bps hike is unlikely to be so soon. Economic data is not great on aggregate, and whilst it is acknowledged the RBNZ have to hike to fight inflation, they do risk stifling an already vulnerable economy. For those  reasons, we think whether they’ll hike another 25-bps next month will once again be a ‘finely balanced decision’. And it also explains why NZD immediately fell after the CPI report, as traders were hoping for inflation to at least match or exceed already high estimates. 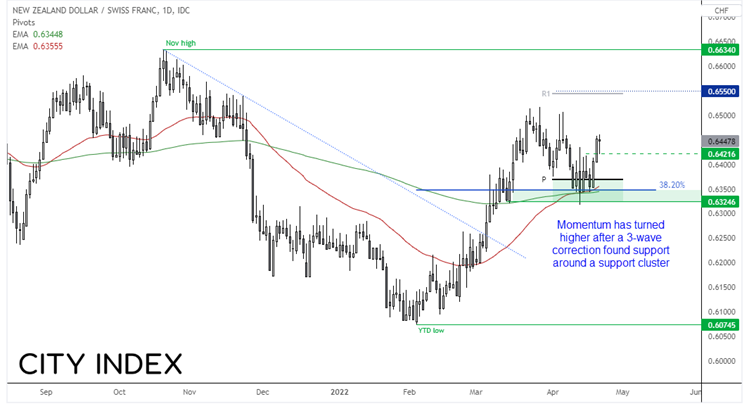 With the RBNZ and Fed on aggressive tightening cycles, NZD/USD may not be the easiest of trades. But for a divergent them then Kiwi bulls could consider longs against low (or negative) yielding currencies such as the yen or Swiss Franc. And as the yen has been in freefall and at risk of intervention from the BOJ (Bank of Japan) then we prefer NZD/CHF longs on a technical and fundamental perspective.

NZD/CHF has been in a strong uptrend since its YTD low in February. Its rally stalled in March and has since produced a 3-wave pullback, which found support around several important levels including the 40 and 300-day eMA’s, 38.2% Fibonacci level and monthly pivot point. Prices have since broken above 0.6400 and we’re now looking for prices to re-test the March high and monthly R1 around 0.6550. We’d expect some level of profit taking but, if this really is the beginning of a trend, prices should eventually break higher and head for the November high.