NZD/USD under pressure ahead of RBNZ

The Reserve Bank of New Zealand will be releasing its rate decision and monetary policy statement on Thursday in Wellington, followed by a highly-anticipated press conference.

The Reserve Bank of New Zealand will be releasing its rate decision and monetary policy statement on Thursday in Wellington, followed by a highly-anticipated press conference. This meeting will be the first for Acting Governor Grant Spencer, who is temporarily in the role while the newly-formed NZ government led by new Prime Minister Jacinda Ardern decides on a permanent appointee. Markets currently expect that the central bank will keep its official cash rate steady at the record low 1.75%, to which it was lowered exactly a year ago on Thursday.

This RBNZ meeting will be of particular importance because it will be the first such meeting after the new coalition government was formed last month. Soon after the election, the New Zealand dollar plunged when the New Zealand First party opted to form a coalition government with the Labour Party, led by relative newcomer Jacinda Ardern, rather than with the incumbent Nationalist Party led by then-PM Bill English. Concerns surrounding this new government with respect to the New Zealand dollar centered on fears that such a coalition could hinder growth. There were also related concerns that a sustained period of lower interest rates would ensue, which could sustain pressure on the kiwi.

If the RBNZ does indeed represent a dovish stance on Thursday, it will reinforce notions that New Zealand’s interest rates will likely stay lower for longer. When this is viewed in contrast against the current Fed-supported rally in the US dollar, NZD/USD could have significantly further to fall on monetary policy divergence alone. Since late July’s multi-year high at 0.7557, NZD/USD has fallen sharply in a steep downtrend, breaking down below multiple key support levels. The noted formation of the new coalition government in October prompted a swift breakdown below previous support around 0.7050 that has followed through substantially to the downside. Most recently, NZD/USD has had a short-term rise that appears to have formed a bearish inverted flag pattern, which could presage a subsequent continuation of the entrenched downtrend. With any further downside momentum as a result of Thursday’s RBNZ release, the next major downside target is around the key 0.6700 support area. 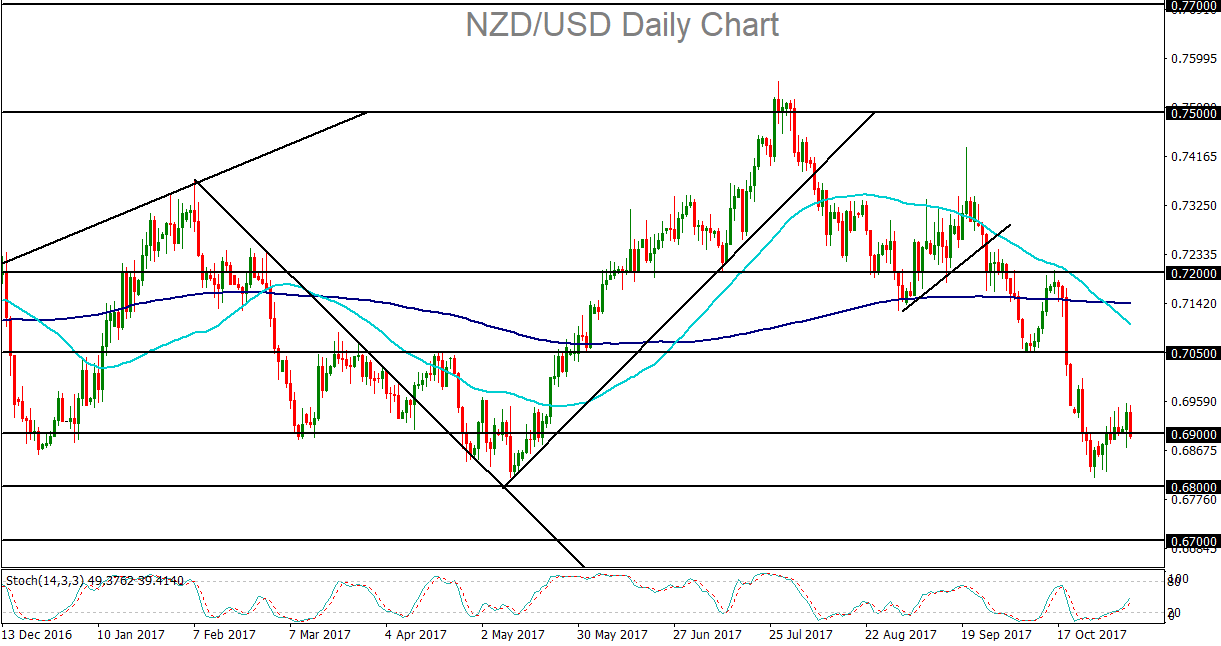