Market participants are showing preference for the Canadian dollar following the Bank of Canada’s recent interest rate hikes and given the outlook for further policy tightening in the months ahead. At the same time, the Reserve Bank of New Zealand is nowhere near ready to tighten its belt.

Price action on the NZD/CAD looks quit heavy and a breakdown appears imminent. Market participants are showing preference for the Canadian dollar following the Bank of Canada’s recent interest rate hikes and given the outlook for further policy tightening in the months ahead. At the same time, the Reserve Bank of New Zealand is nowhere near ready to tighten its belt. This disparity in monetary policy stances between the BOC and RBNZ could weigh on the NZD/CAD for a while yet, especially if Canada manages to find an agreement in NAFTA talks with the US. Meanwhile from a technical point of view, the NZD/CAD has already peaked back in November 2016 when rates couldn’t break the 0.99 handle. Since then, at least three distinct lower highs have been formed and lots of support levels have broken down. Today, the cross has taken out the support trend of a short-term triangle pattern that was created in the aftermath of a sizeable sell-off at the end of June. The fact that rates couldn’t stage a more significant bounce following that sell-off and after a lengthy consolidation means the selling pressure must have remained strong. Indeed, the selling could accelerate if it breaks a more significant bullish trend line which is now in sight at 0.8860. If this level were to give way then a re-test of the November 2017 low at 0.8640 could become a strong possibility in the coming days or weeks. Conversely, if the NZD/CAD goes back above the most recent high at 0.8990, then in this scenario the short-term bearish bias would become invalid. Even so, the longer term outlook would remain bearish until a significant higher high has been made. 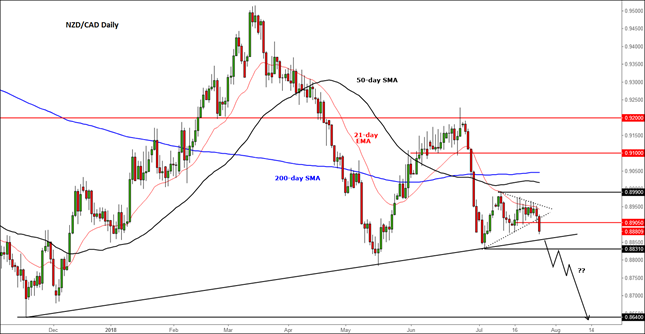