NZD/CAD breaks out ahead of key week for Loonie

Today has been a bad one for North American dollars; a decent one for European ones, and an even better one for antipodean currencies.

FX update: Today has been a bad one for North American dollars; a decent one for European ones, and an even better one for antipodean currencies. Pressure grew on the Federal Reserve to cut interest rates further thanks to another disappointing ISM manufacturing PMI reading while Donald Trump again called for looser monetary policy in order to help weaken the dollar. European currencies rose against the buck with the euro and in particular safe-haven Swiss franc outperforming. But by far the best performers have been the Australian and New Zealand dollars, which rose sharply on the back of surprisingly strong manufacturing PMI data from China. These currencies were also able to shrug off a risk-off session which saw equities and USD/JPY tumble.

CAD in focus: With volatility picking up, traders are all of a sudden spoilt for choice. But one particular major currency to watch for continued volatility is the Canadian dollar this week. As we reported in the Week Ahead article on Friday, the Bank of Canada’s next rate decision is on Wednesday, followed by the OPEC+ meetings on Thursday and Friday and then the Canadian jobs report comes out on Friday.

NZD/CAD among top performers: Ahead of the above fundamental events, those who are bearish on the CAD could perhaps look for bullish opportunities on the likes of NZD/CAD or AUD/CAD, given today’s outsized moves in antipodean currencies. With the AUD/NZD breaking down recently, the NZD/CAD is a better long candidate than the AUD/CAD. Meanwhile, CAD bulls may be better off looking for short opportunities in the likes of the USD/CAD or EUR/CAD That’s because the buck has also come under pressure today on the back of weaker PMI data, while the single currency is likely to be held back by the lack of growth in the Eurozone.

Technical perspective: The NZD/CAD looks bullish. It has broken out of a short-term consolidation pattern to the upside today. This comes several days after rates moved north of 0.8500 handle, a key horizontal resistance level where a bearish trend line also converged. So, the path of least resistance was already to the upside and now we have further bullish confirmation. Given the size of today’s rally, some hesitation should be expected over the coming day or two. But ultimately, more gains could be on the way with the next potential resistance around 0.8690, where the 200-day also comes into play. The bullish outlook will become invalidated if rates were to go back below 0.8500 at some point down the line. 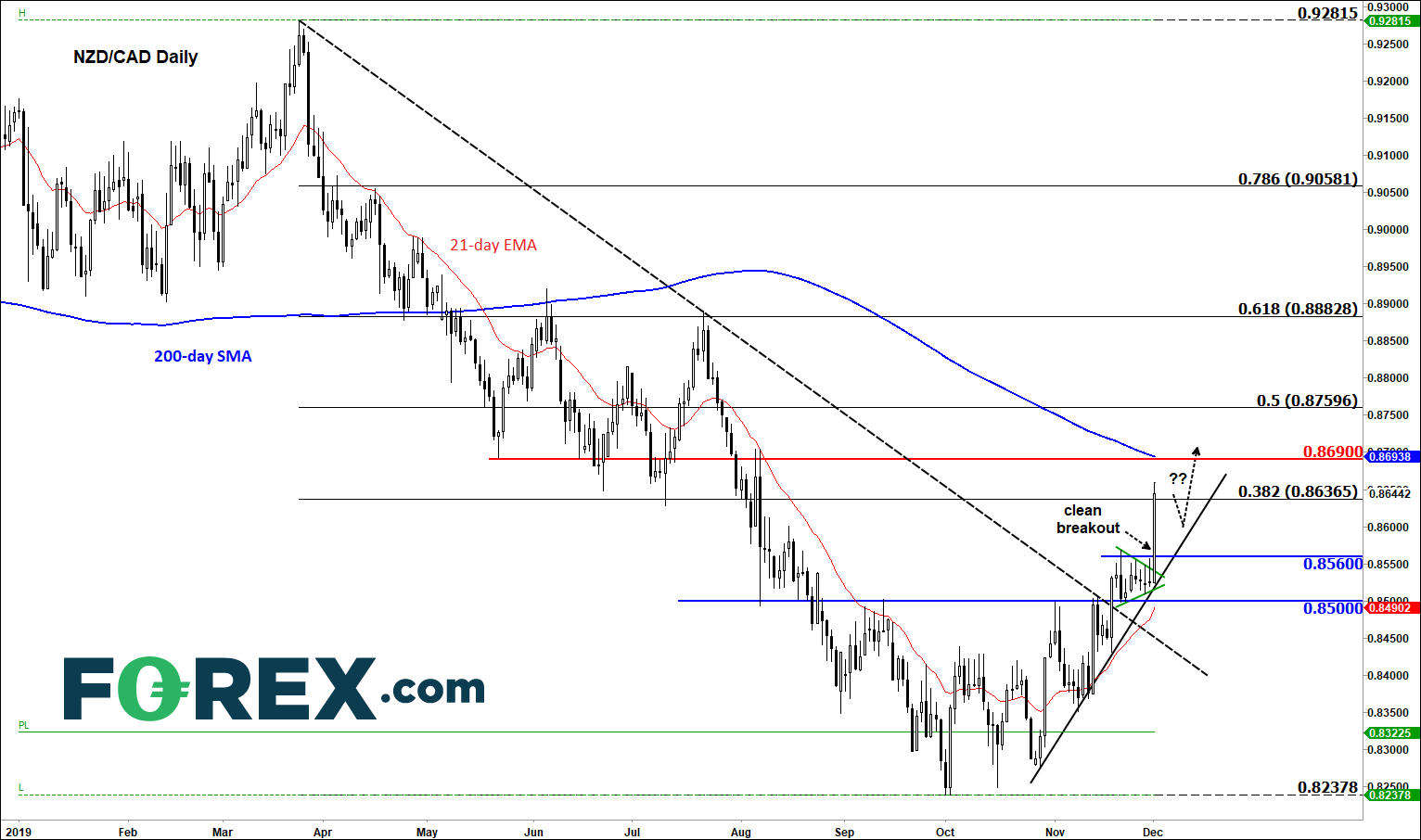 BOC, OPEC and Canadian jobs data coming up: Now before we get too carried out with the technical setups on the NZD/CAD, it is worth briefly discussing the Bank of Canada’s rate expectations and the jobs report here. Canadian employment suffered an unexpected drop last month after two consecutive months of solid gains. If we see another negative reading, then the North American dollar could fall sharply as the likelihood of a Bank of Canada rate cut in 2020 increases. Incidentally, the BOC’s last meeting this year is on Wednesday and is expected to hold interest rates unchanged. But at 1.75%, the Canadian benchmark rate is currently the highest among the developed economies. S, there’s clearly room for manoeuvre should policy loosening is required. The BOC has already dropped its hawkish bias and if we see more dovish commentary at this meeting then the CAD could resume its slide in mid-week, before the jobs report is published. However, if the BOC turns out to be not as dovish as the markets expect, then this could be a real surprise, potentially leading to a rally ahead of the OPEC and Canada’s jobs report later on in the week.