The New Zealand dollar slumped overnight on the back of a dovish Reserve Bank of New Zealand. While interest rates were kept unchanged as expected, the kiwi fell sharply after the RBNZ said in its policy statement that it expects to keep rates low for "a considerable period of time."

The New Zealand dollar slumped overnight on the back of a dovish Reserve Bank of New Zealand. While interest rates were kept unchanged as expected, the kiwi fell sharply after the RBNZ said in its policy statement that it expects to keep rates low for "a considerable period of time." The growing divergence in monetary policy between US and NZ means the kiwi could fall further over time, but with the Canadian dollar also now showing signs of strength the NZD/CAD could also decline further in the coming days.

The oil-linked Canadian dollar has managed to find some much-needed support thanks to the ongoing rally in crude prices. It has even managed to find support against the US dollar, causing the USD/CAD to turn lower from a key technical resistance area. The US dollar has also been undermined by news the world’s largest economy grew at a slower pace in the first quarter.

But the CAD’s biggest gains by far came against the New Zealand dollar today. Technically, the NZD/CAD looks quite bearish to us, but we wouldn’t rule out the possibility of a pullback before the downtrend probably resumes again. Ideally, we would like to see a pullback to old support levels at 0.9030 or at most 0.9100 before seeing bearish price action again. But any sustained move 0.9100 would most likely be the end of the bearish control. Meanwhile the next bearish objective is at 0.8910, a level which was formerly resistance. A sustained break below this level would potentially pave the way for the next pools of liquidity that would be resting below the prior swing lows at 0.8785 followed by 0.8640. 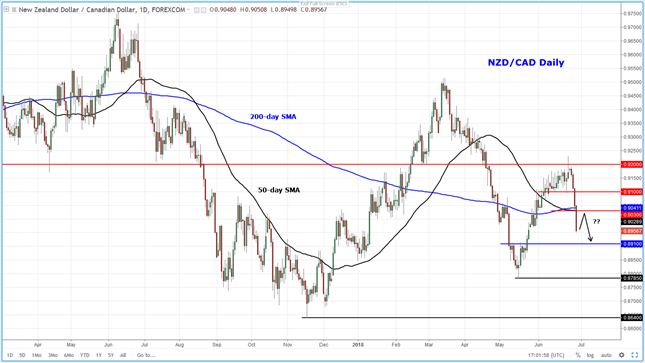