Tonight’s key fundamental event is the Reserve Bank of New Zealand’s policy meeting, scheduled for 22:00 BST or 17:00 ET. The RBNZ is widely expected to trim interest rates 25 basis points to a new record low of 2.0 per cent.

Tonight’s key fundamental event is the Reserve Bank of New Zealand’s policy meeting, scheduled for 22:00 BST or 17:00 ET. The RBNZ is widely expected to trim interest rates 25 basis points to a new record low of 2.0 per cent. The market seems to have mostly priced in this scenario. The RBNZ will therefore need to be more dovish if it wants to weaken the Kiwi further. A 50 basis point cut could certainly do the job, but that appears unlikely. If the bank does cut interest rates as expected but accompanies it with a neutral or slightly hawkish statement then the NZD could actually rally. Needless to say, if it takes no action then this would almost certainly be the most bullish outcome for the NZD.

Thus, whichever way you look at it, the Kiwi is unlikely to fall significantly and it may actually bounce even if the RBNZ decides to cut rates by the expected 25 basis points.

One of the more interesting NZD pairs to watch around the time of the RBNZ rate decision for a trade idea may be the NZD/JPY.  Conservative traders may wish to gauge the reaction of the market to the news before potentially opening a trade. But from a purely technical perspective, the NZD/JPY may have already formed a low in June when it tested and held above the long-term support level of 69.35 (this was a significant resistance level in the past).

The rebound from that important technical level was an impressive 750+ pips.  But since hitting resistance and the back side of the long term broken trend line around 76.75, the unit has been drifting lower inside a short-term bearish channel (as shown on the 4HR chart in the inset).

Nevertheless, the NZD/JPY has shown some signs of life in recent trade, around the technically important 72.50 level (which has been defended on a weekly closing basis several times). More importantly, the long-term support level at 69.25 remains intact. What’s more, price is rising inside a smaller bullish channel within its larger bear channel.

All the bulls need to see now is a break above the resistance trend of the bear channel and last week’s high at 74.20. If seen, the NZD/JPY could easily climb back towards the more established resistance level at 76.75. However a break back below 72.50 could expose the next support levels at 71.40 and possibly 69.25 for a re-test. 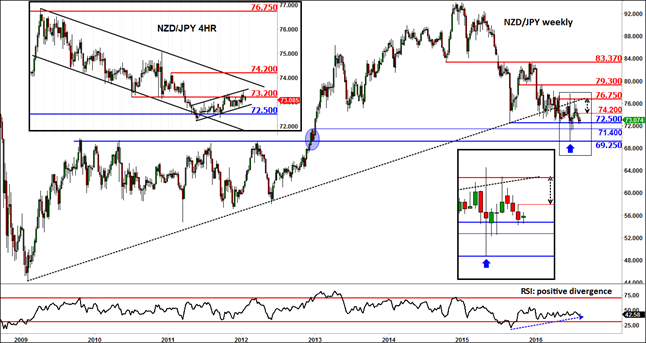