New Zealand’s employment figures for the second quarter will be released tonight at 23:45 BST (Wednesday morning NZ time). Employment is expected to have risen 0.7% in Q2 following an increase of 1.2% in Q1. ..

New Zealand’s employment figures for the second quarter will be released tonight at 23:45 BST (Wednesday morning NZ time). Employment is expected to have risen 0.7% in Q2 following an increase of 1.2% in Q1. The rate of unemployment is seen falling to 4.8% from 4.9 per cent previously. The numbers may have to beat expectations if the kiwi is going to sustain its recent rally, for earlier the fortnightly Global Dairy Trade (GDT) auction saw prices fall 1.6% following a 0.2% increase at the previous sale. Although Whole Milk Powder prices rose 1.3%, Skim Milk Powder prices declined 3.0 per cent. What’s more, butter prices dropped a good 4.9 per cent. Why are we even talking about milk prices? Well, it is quite important for the New Zealand economy, as dairy products make up their main exports. So when dairy prices fall, it is not good for their economy and in turn its currency. Thus, kiwi bulls better hope that the employment figures will come in stronger tonight, otherwise there is a risk that the NZD/USD rally could falter.

From a technical perspective, the trend for the NZD/USD has been bullish ever since it trapped the sellers when it created a false breakout attempt below horizontal support at 0.6865 towards the end of April and start of May this year. Now it could be in the process of trapping the buyers: after breaking above the top of the recent resistance range at 0.7480/5 area it has failed to make significant further bullish progress. This may be due to profit taking after the recent upsurge, as investors awaited key New Zealand data. But from a purely technical perspective, any further move down below that broken 0.7480/5 level would be deemed bearish.

That being said, the kiwi will then face several support levels, including the area shaded in grey, where it had found resistance in the past. So the sellers will have lots of wood to chop if they are going to take control of the trend again. In the short-term, the breakout level at 0.7450 is the first key support to watch, which may get tested tonight. Given the overall bullish structure of price, I wouldn’t rule out the possibility of a strong rebound at or around this key support level. But from a bullish point of view, I would become more confident if the kiwi were to climb back and hold well above that 0.7480/5 level, ideally above 0.7520/5 resistance. In this potential case, I would then expect to see further range expansion to the upside with the 127.2% Fibonacci extension level at 0.7665 being my next objective. 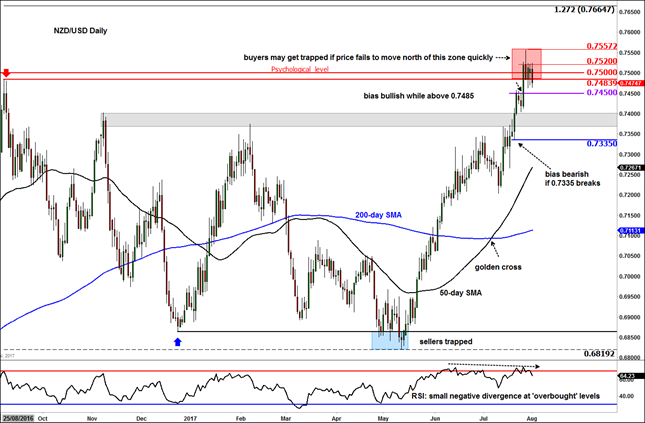