OPEC+: No more oil for you!

Members agreed to keep the current oil output at an increase of 400,000 bpd for December, despite a call by some countries for more supply

At November’s virtual OPEC+ meeting, members agreed to keep the current oil output at an increase of 400,000 bpd for December, despite a call by some countries for more supply, which include Japan, India and the US.  Members feel that the effects of the Delta Variant of the coronavirus are still being realized and that a gradual increase is still the right decision.  OPEC+ members also noted that although they recognized that supply was right tight now, they would rather keep output at current levels, than risk over-supplying the markets and pushing prices lower.   They also blame increases in energy prices on events that are out of their control, such as the steep increase in the price of natural gas.

What factors influence the price of oil?

WTI crude oil has been going bid since the dramatic selloff in April 2020.  Crude Oil formed an inverted head and shoulders pattern during August and broke above the neckline at 69.84 on September 10th.  WTI quickly burst through the pattern target at 78.00 and stalled at a confluence of horizontal resistance and the 161.8% Fibonacci extension of the move from the highs of July 6th to the lows of August 23rd, near 85.50/86.50 on October 25th.  Profit taking ensured heading into today’s OPEC+ meeting. 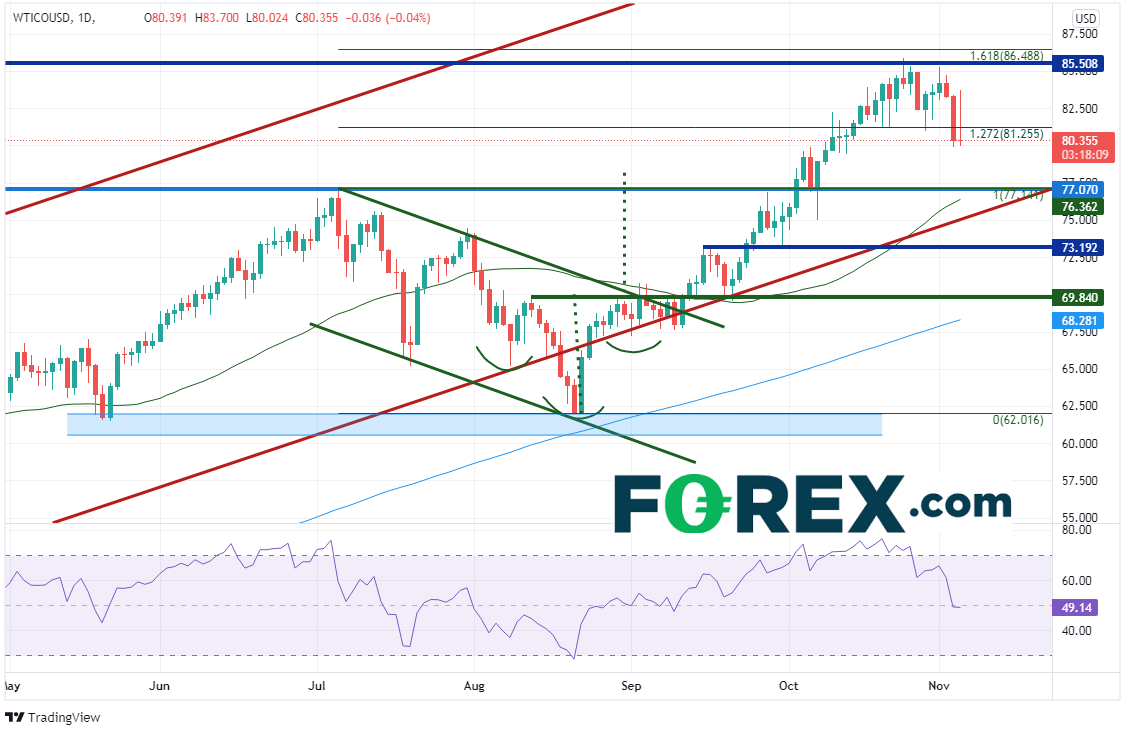 Prior to the announcement, WTI was heading higher on the day, as markets realized OPEC wouldn’t increase production.  However, after the announcement, price reversed and moved from a high of 83.70 down to a low of 78.52, a move nearly 6.2%.  Markets started to get excited by rumors that the US may increase the supply of oil by releasing it from the Strategic Petroleum Reserve (SPR). (Didn’t Biden say he was going to sell some of the SPR to pay for infrastructure?)  Price bounced just before the close, down 1.75% for the day.  On a 240-minute timeframe, price broke below the upward sloping trendline dating back to August 22nd and below horizontal support at 79.88.  The next level of support isn’t until the previous highs from July at 77.14, then the 38.2% Fibonacci retracement level from the August 22nd lows to the October 25th highs near 76.77.  Below there is the 50 Day Moving Average at 76.36 (see daily).  Resistance now is at previous support of 79.88 and then today’s highs at 83.70! 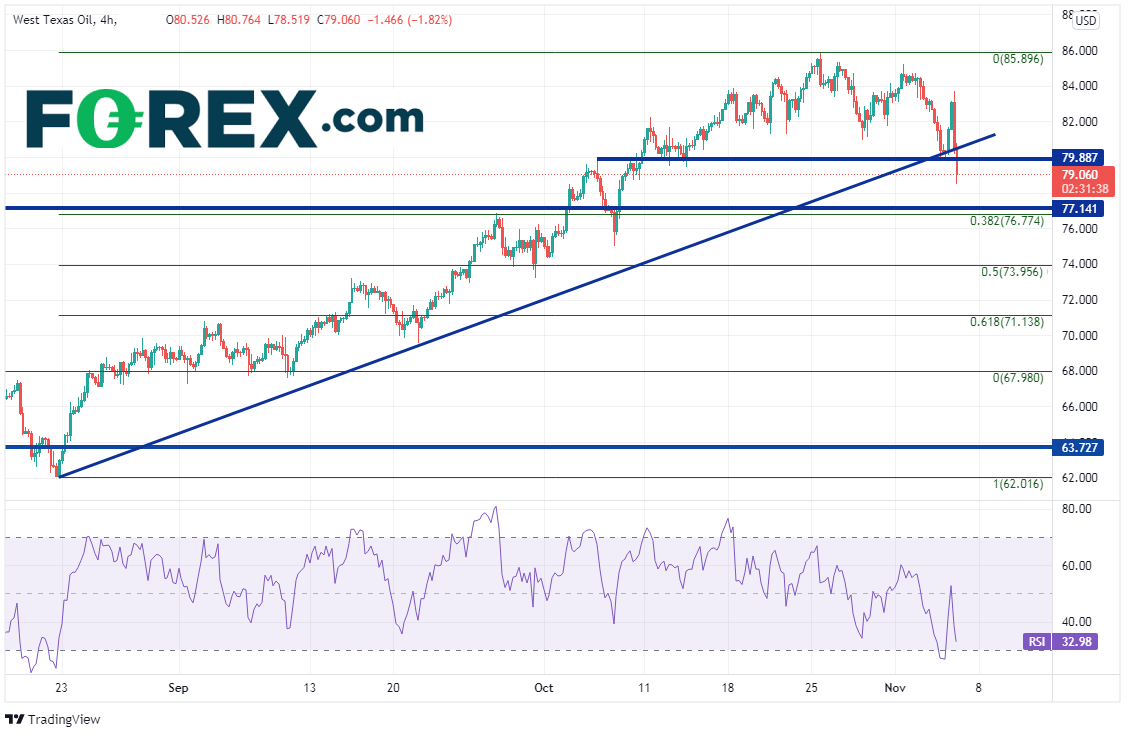 USD/CAD is correlated with the price of Crude Oil.  The current correlation coefficient is -0.72.  We look for correlation coefficients lower than -0.80 to be considered strong.  However, it’s easy to see on the daily timeframe that the 2 assets are still inversely correlated.  For the correlation coefficient to become a relevant factor again, either Crude must stop falling at such an aggressive pace or USD/CAD needs to pick up the pace towards the topside.  USD/CAD IS currently testing trendline resistance on a flag pattern on the daily timeframe, as well as, the 200 Day moving average at 1.2479.  If price breaks above, the flag pattern is negated, and price may head back towards horizontal resistance and the 50 Day Moving Average at 1.2545. (And if crude moves lower, the correlation would be strong again).  First support is at today’s low of 1.2377 and then the bottom of the flag trendline at 1.2325.  Below there is the low from October 21st at 1.2288. (If crude moves higher, the correlation will be strong again). 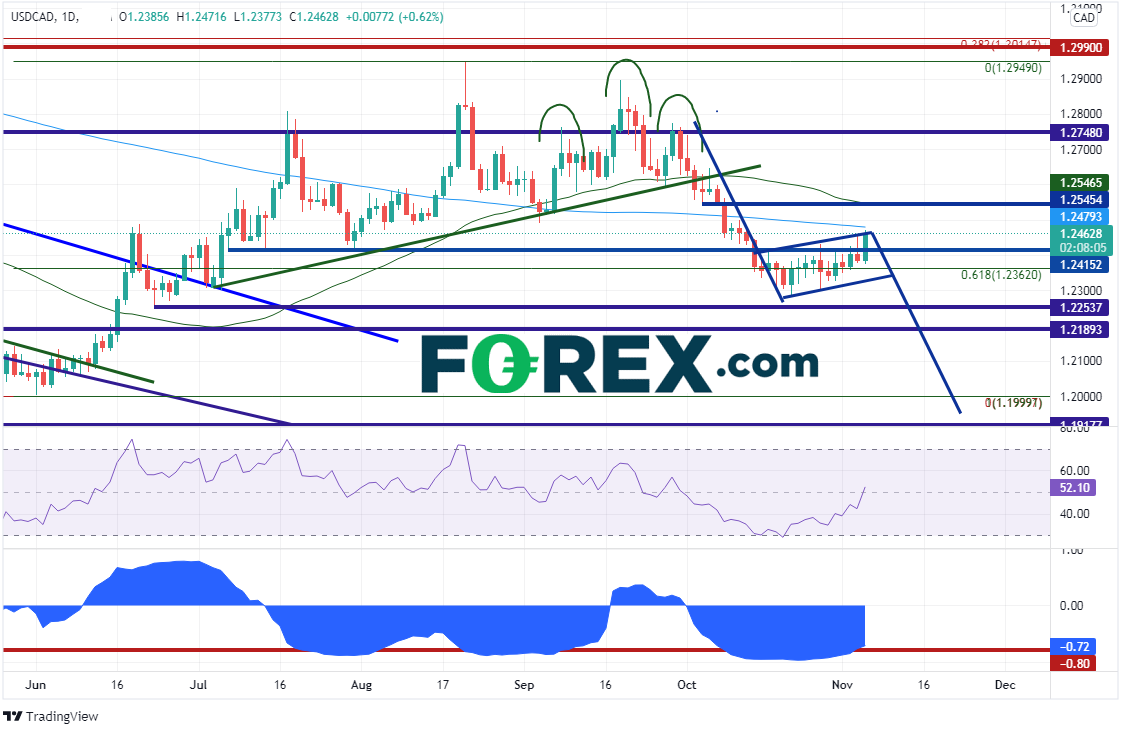 With OPEC on hold, traders may think that the price of oil should be higher.  However, with rumors swirling that the US may release oil from the SPR, price is down significantly.  With today’s close near $79 (lowest level since October 8th), perhaps the government pulls in the reins a bit.  If crude oil does move higher, watch for USD/CAD to move lower from resistance at the top of the flag pattern and the 200 Day Moving Average!