OIL MARKET WEEK AHEAD: Another Round of OPEC Wrangling

The next OPEC meeting is just around the corner and the wrangling between Saudi Arabia, OPEC and Russia over production levels has started again.

The next OPEC meeting is just around the corner and the wrangling between Saudi Arabia, OPEC and Russia over production levels has started again. Russia and Saudi Arabia are finding themselves yet again at loggerheads and while Saudi Arabia is calling for the current cuts to be extended beyond the current July deadline, Russian producers are proving reluctant.

However, what is different this time compared with the similar disagreement the two major producers had at the start of the coronavirus outbreak is that not only is their production already substantially lower – total Saudi oil shipments in May declined to 6.6mbd from 9.3mbd in April - but US production is also significantly lower. The US oil rig count has been decimated with only 318 rigs still operational at the end of last week, down a full 665 from a comparable week in 2019. This, coupled with the reopening across Europe and the US, makes it difficult to gauge where oil producers’ output levels “should be.”

Russia will again play for time, waiting to see if the reopening of Europe and the US will create sufficient demand to remove the built-up surplus. In the US this will still take a while as the massive amount of Saudi oil shipments dispatched just before the production cuts were put in place in May are still either being offloaded or waiting to offload - hence this week’s increase in US petroleum stocks reported both by the American Petroleum Institute and by the Energy Information Agency. Nonetheless, the overload of crude oil in the US should start easing over the coming weeks. Saudi Arabia has dispatched only a modest 570,000 bbl to the US in May, down from 1.3bn bbl in April.

US, Eurozone and German manufacturing PMI data on Monday will provide some insight into the speed of recovery in the manufacturing industry in major economies and consequently demand over the coming weeks. Equally key will be US jobless data on Thursday and Friday.

What is happening with air traffic?

Most of the airlines that have managed to survive the coronavirus, albeit sometimes with government help as in the case of Lufthansa and the US carriers, are tentatively resuming flights in June and are expecting to increase the number of planes in the air throughout July and August. The closest idea about what the rest of the year could be like for the airline industry comes from the International Aviation Travel Agency’s monthly Air Passenger Market Analysis published at the end of each month. In April, 47% of travellers surveyed by IATA said that they would wait a month or two before travelling by air while a solid 30% didn’t expect to board a plane for another six months. Doing some rough maths on the numbers and adding these travellers with another 10% that don’t expect to fly before the end of the year and another 5% that don’t intend to fly at all in the foreseeable future means that air travel is unlikely to return to more than 55% of its capacity before the end of the year. 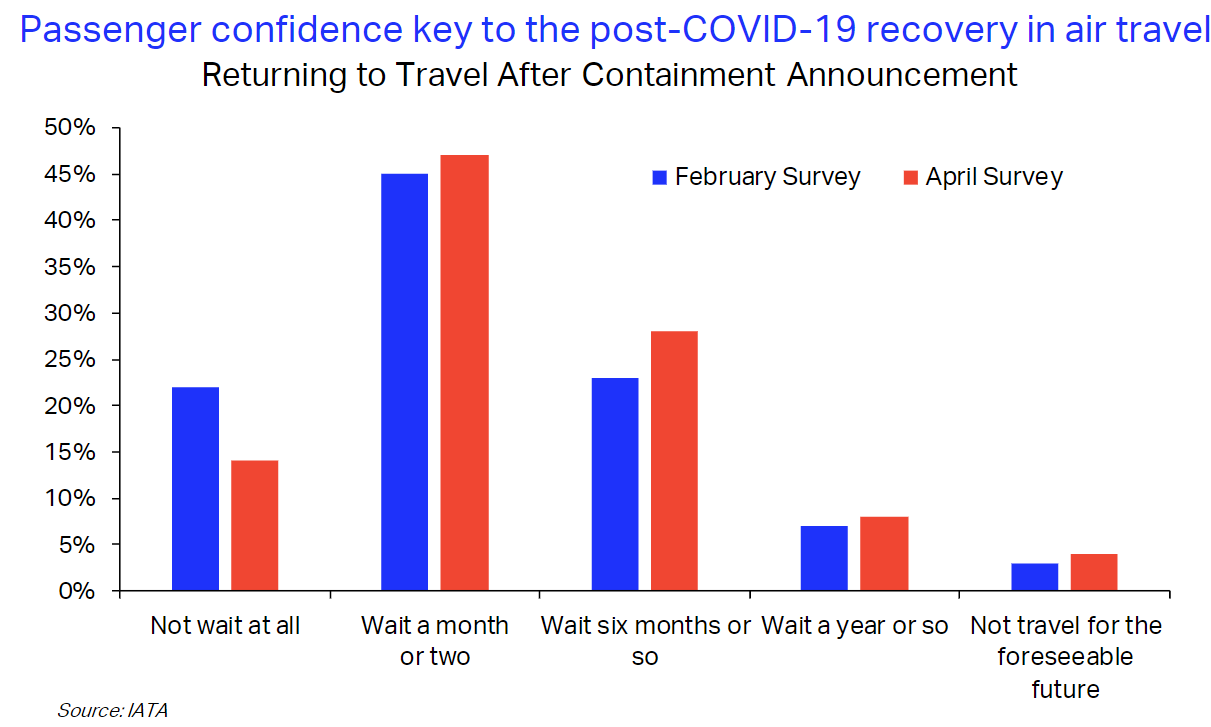 For Latin America, where the virus is raging at full strength, the recovery will take significantly longer as some countries, like Argentina, plan to have a flight ban in place until 1 Sept. For the moment the surplus jet fuel available in the market is being either blended down into diesel pool, creating a surplus of diesel, or is being stored at sea, which is a risky option because it degrades after several months and can no longer be used for flying.

Of all the oil products demand for jet fuel demand is likely to take the longest to recover.