OIL MARKET WEEK AHEAD: Are We There Yet?

The pressure to reopen sooner rather than later will be enormous given that more than 20 million jobs have been lost over the last four weeks...

Phased reopening of the US economy

As the lockdown in the US continues to inflict damage not only to businesses, the job market, but also the sanity of all involved, the blue print for reopening of the country provided by the White House this week provides a proverbial “light at the end of the tunnel” for US citizens on lockdown. The blueprint allows for a reopening in stages that will depend on clear signs that the pandemic is being contained and as dates are not carved in stone, it will be down to each individual governor to decide if their state has met the criteria.

The pressure to reopen sooner rather than later will be enormous given that more than 20 million jobs have been lost over the last four weeks. The coming week is likely to see some governors making use of the blueprint to allow a gradual return to work and a tentative restart of businesses. 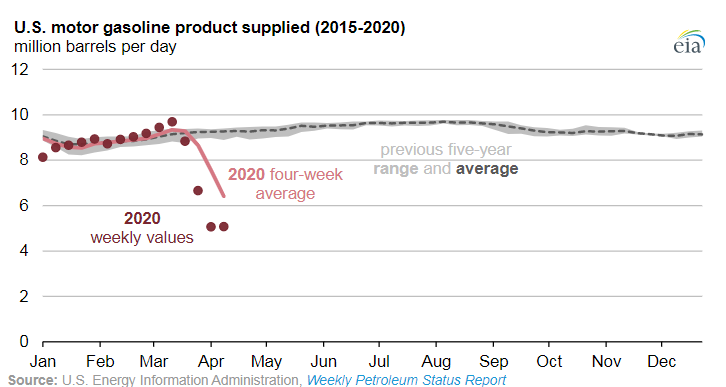 The oil industry’s corporate reporting season got under way this week with Schlumberger. As an oil services provider, Schlumberger is active in projects operated by most oil majors across the globe and can be used as a good proxy for where the oil industry is at in terms of extraction, projects that are still coming on line, and comparison of how different regions are reacting to the coronavirus. The company reported a 9% quarterly decline in revenue and a 5% decline on the year, which under the circumstances can be read as a good result given the worldwide grip of the virus.

Oil services firms Halliburton and Baker Hughes will release their results on Monday and Wednesday, respectively, and their assessment of global drilling activity will show by how much drilling and extraction of oil has shrunk and which regions have been the worst hit.

The results from oil majors will be all crammed into the last week of April with earnings from Total, Royal Dutch Shell, BP, ConocoPhillips, Exon Mobil, Chevron and China’s CNOOC and Sinopec all pouring in within days of one another.

While we know what kind of production cuts are planned by OPEC and Russia, at least in theory, there is no unified information on what US and Canadian producers are planning. Earnings reports will be an opportunity to see by how much majors have cut their output and how much demand damage they expect over the coming months, particularly from badly hit industries such as airlines.

Although Russia and OPEC have agreed to significantly scale back oil output in the face of overwhelming oversupply in the market, there is still a large gap between what has been written on paper and what is happening in real life. Russian producers are squabbling over who should be the one to cut output, with all taking the “not me” attitude. Given the high price tag associated with a production shutdown, not only Russian producers but all others will try and delay for as long as possible. Look out for updates from both Russia and Saudi Arabia on actual production and export levels.