OIL MARKET WEEK AHEAD: OPEC and Russia Back at the Negotiating Table

The evaporating demand caused by the coronavirus was further exacerbated by Russia and Saudi Arabia’s spat over production levels eventually leading to a 60% drop in prices this year. Despite its early refusal to coordinate a production cut with OPEC, Russia has now extended an olive branch saying it was willing to talk, as demand destruction proved more excessive than most analysts had expected.

Political pressures also ratcheted up with President Trump calling on the two countries to come to some agreement about lower production, while at the same time not offering for US producers to do the same. The latter has been a bee in both Saudi Arabia’s and Russia’s bonnets, and it will likely make it onto the agenda of OPEC’s talks Monday.

Here are some hard realities that will force producers’ hands: Russia planned on increasing exports by a modest 1.4% between April and June, but this is becoming wishful thinking in the face of the coronavirus spread. Using Poland and Germany as an example, Russia has earmarked a sales increase of 0.4% to the two countries for the coming quarter, but both Poland and Germany are in near lockdown, public transport has been reduced to a fraction of its previous operations, airlines remain grounded, and both countries have blocked off their borders.

There is no sign of a meaningful slowdown in the spread of the virus, with Germany recording nearly 7,000 new cases per day in the last few days. Restrictions across Europe are set to remain in place at least until the end of April, in a best case scenario, but most likely until the end of June, and none of the Russia’s planned increases into Europe will actually materialise in the near future. Longer term contracts, however, are likely to be negotiated at these new, lower prices levels.

Cut, but By How Much?

Saudi Arabia and all of the OPEC producers face the same issues across their respective markets and the key question now is not only if OPEC will agree to cut, but how big a cut would actually be able to stem the current decline in prices? This will largely depend on OPEC’s internal estimates on how long the coronavirus crisis is likely to last and on whether US producers are willing to become part of a joint effort to curtail production.

With the US market now facing a glut of crude oil, some of the US economic indicators will be critical to show how badly demand is being eroded by the spreading pandemic. The last two weeks of initial jobless claims made for a grim reading with numbers coming in off the charts.  It might be too early to hope for a levelling off in the number of new claims due out on Thursday as the worst of shop and business closures may yet still be ahead. Similarly, the Baker Hughes US rig count is expected to show a further reduction as domestic output struggles. A long weekend over Easter may be the only relief next week. 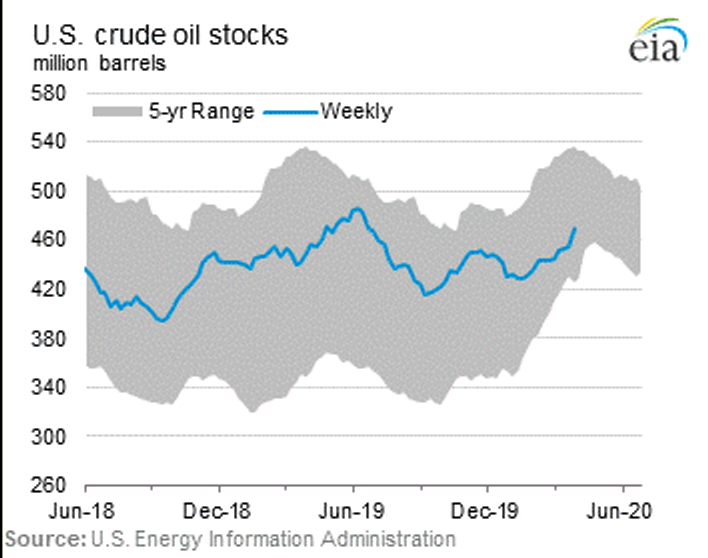