The week ahead will be shaped by OPEC+ compliance, the US job market and Chinese industry...

The week ahead will be shaped by OPEC+ compliance with May and June production cuts, the state of the US job market and the speed at which Chinese industry starts bouncing back after the ravages of COVID-19. Speculative traders will likely approach the next expiry of the WTI contract on 22 May with caution, meaning that the week ahead could see some repositioning following the recent rally in oil prices.

The output cuts pledged by Russia, Saudi Arabia and other OPEC countries will start being enacted in May, but that doesn’t mean that there will be an abrupt reduction in supply. The Saudi tankers there were loaded up before the 1 May deadline are still either in transit or are sitting off the US coast, waiting to be unloaded. Russia will take most of May and June to enact the costly cuts and based on previous track record, may only reach a compliance rate of around 80%. Production continues to be a game of who can last the longest at current prices and here Russia and Saudi Arabia may end up having the upper hand.

ConocoPhilips, ExxonMobil and Chevron all announced output reductions that total over 1m bpd while seven US shale produces filed for Chapter 11 bankruptcy protection. Some of the smaller US producers said that they are hoping to restart production by the end of July or in early August but given the devastation in the US job market, where the unemployment rate has surged to 14.7% and the number of new jobless claimants has risen to above 32 million, this may be slightly too optimistic. Look out for new jobless data on Thursday and US industrial production data on Friday for any signs that an easing of the lockdowns across the US is beginning to restore the economy.

Since the collapse of the WTI May contract prices in late April, hedge funds and other money managers have been betting on the April price to have been the low point for this year. Money managers purchased the equivalent of 41 million barrels across various petroleum futures and options contracts as WTI futures bounced back from a low of close to $10 back to $24. This precarious optimism is about to be tested as the June WTI expiry date comes closer. The CFTC commitment of traders published on Fridays lags behind what is happening in the market by a week but will start showing a pattern that we are likely to see going forward until the heavy surplus of oil in the US is cleared up.

Is China the light at the end of the tunnel?

China’s April industrial production numbers will show to what degree the country has bounced back from the coronavirus. Most other Chinese indicators are currently still below their pre-corona levels, particularly trade and GDP data, but Friday’s April industrial production numbers will show whether the country has gone back to producing close to pre-corona levels. The interpretation of the numbers will not be entirely simple because a recovery will not only depend on what is happening internally in China, but also how badly the global spread of the pandemic has affected demand for Chinese goods. However, a recovery in China’s industrial production also means that there will be demand from China waiting for Western goods and products, which could lift European and US production out of the doldrums once the coronavirus in these regions is under control. 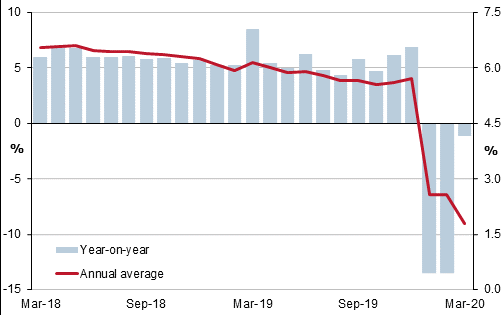