I think it is definitely a bullish move for oil prices in the short term outlook as above all it shows unity among oil producing nations once again, especially if non-OPEC producers such as Russia were to also join them in cutting their crude output. However, it is important to note that the OPEC output will still remain near record high levels and there is scope for some members to ignore the production cap. For oil prices to rise more meaningfully, US crude supplies will need to decline further and/or the outlook for global demand growth needs to improve more robustly. In the US, crude stockpiles have fallen relatively sharply over the past four weeks, which is good news. However, the number of rig counts have generally risen over the past few months, suggesting that the decline in oil production could come to a halt soon. And if the OPEC’s decision to limit oil output helps to raise prices significantly then that should in turn lead to higher non-OPEC production, mainly from the US.

So what does that mean for oil prices? I think in the short-term, prices will most likely head further higher but then start to fall back as US oil supply probably rises again, say when prices are some distance north of $50 a barrel. As before I expect oil prices to remain in the range between $45 and $65 a barrel in the fourth quarter. Both oil contracts appear poised to move outside their converging trend lines to the upside. If successful, this should trigger fresh momentum buying interest and potentially lift Brent and/or WTI to their respective key $50.00-$51.00 resistance zones once again. The key short-term support levels to watch are at $48.20 and $47.25 for Brent and $46.45/55 and $45.75 for WTI, levels that were previously resistance. 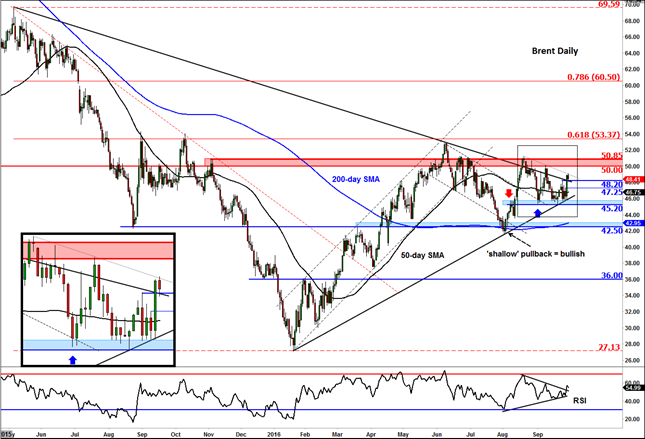 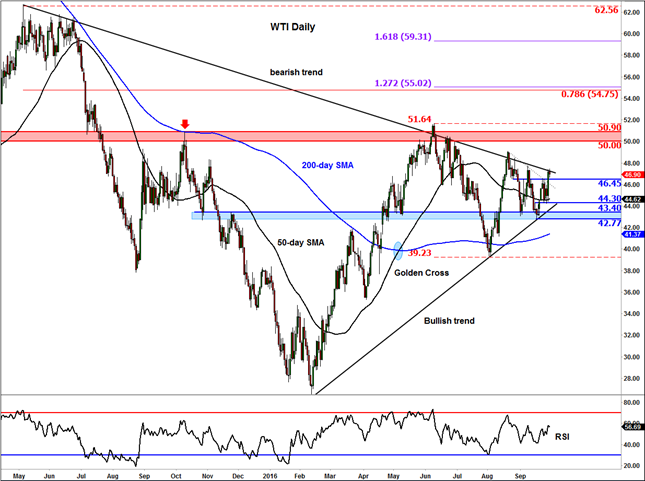