As long as prices hold above the 50-day EMA near 68.00, long-term bulls could view any post-OPEC short-term dips as buying opportunities...

With the traditional “summer driving season” in full swing as developed markets continue to vaccinate their populations, demand for oil and its derivatives is on the rise. Against this backdrop, the so-called OPEC+ group (consisting of the Organization of Petroleum Exporting Countries and its allies) meets for a high-stakes meeting later this week.

When is the OPEC+ meeting?

“All day” July 1, with an announcement expected in the evening European time,  around midday US time.

That’s the big question on every trader’s mind…and the answer is (probably) yes.

The cartel has already committed to adding 2.1M bpd from May to July, and while it could make changes to the plan for July, the group is more likely to tweak its August production schedule at this week’s meeting. Based on calculations by Reuters, the most recent OPEC forecasts point to a supply deficit of 1.5M bpd in August as it stands, so there’s a strong case for further opening the spigots to meet rising demand. The International Energy Agency predicts an even more dramatic shortage of 4.6M bpd through Q3.

Several banks have gone on record expecting OPEC+ to increase output by 500k bpd starting in August, a development which may still leave the global oil market undersupplied and potentially support higher prices. With traders focused on this 500k bpd figure for August, a smaller increase would likely be bullish, whereas raising production by 750k+ bpd could be a short-term negative for oil prices.

The other wildcard to watch is Iran. The Middle Eastern country is expected to resume indirect talks with the UK over the country’s nuclear program shortly, which could eventually lead to the more Iranian crude oil hitting the market, but that is unlikely until later in the year regardless. In other words, OPEC+ will likely make this week’s decision based solely on the current state of affairs and re-evaluate the situation with Iran at future meetings.

WTI crude oil has rallied in each of the last 5 weeks (and 8 of the last 9), leaving so-called “black gold” within striking distance of its 6-year highs in the mid-$70s. While the trend is definitively bullish over the last year, there may be some reason for caution with WTI stretched well above both its 21- and 50-day exponential moving averages and the 14-day RSI indicator showing a small bearish divergence. This pattern, characterized by a “higher high” in price but a “lower high” in the RSI indicator, signals waning buying pressure and elevated odds of a near-term pullback to trend support: 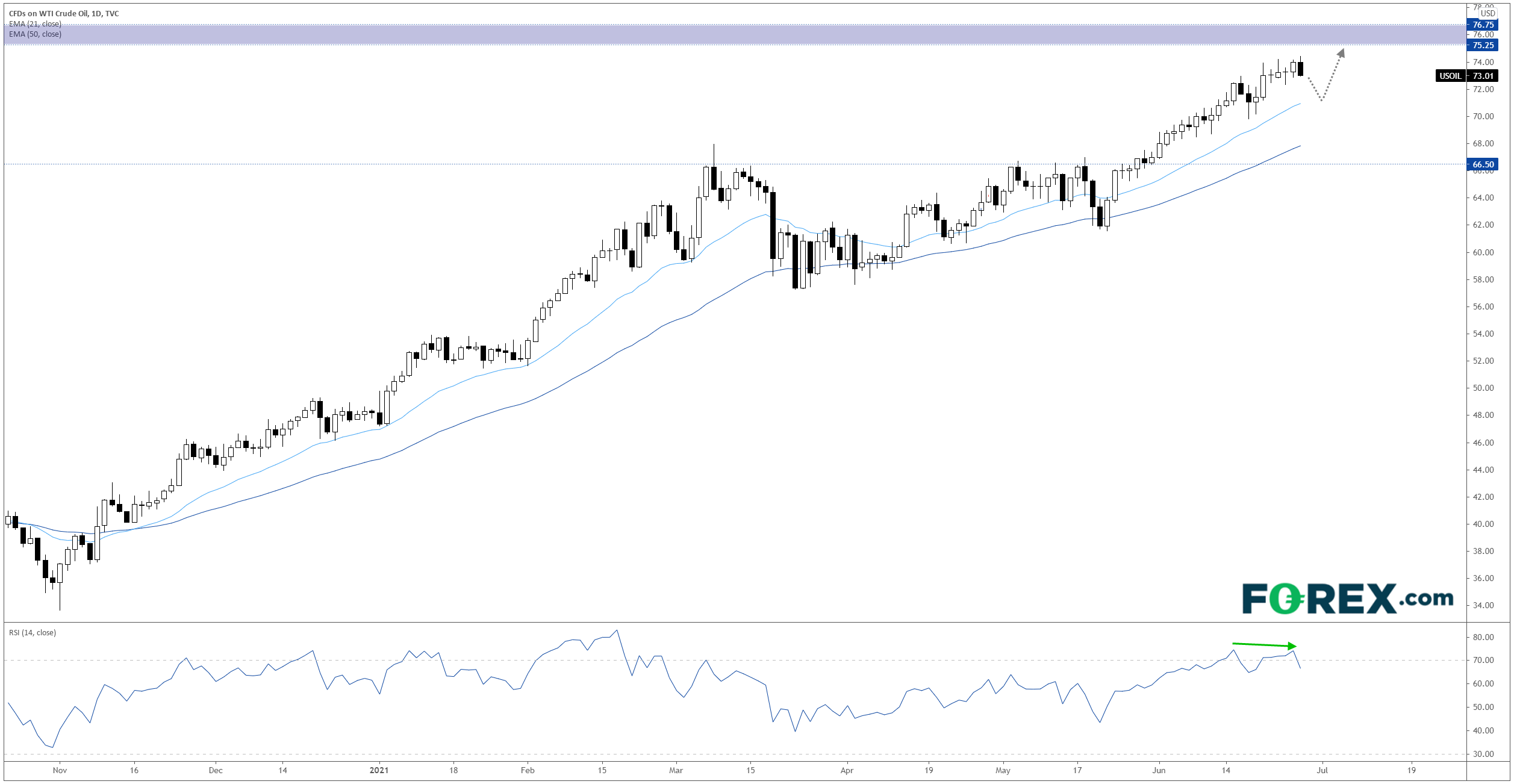 Of course, a surprise decision (either a big production hike or no changes) could overwhelm any near-term technical concerns, but as long as prices hold above the 50-day EMA near 68.00, long-term bulls could view any post-OPEC short-term dips as buying opportunities for a potential test of resistance in the 76.00 zone