Ahead of Thursday’s meeting, cracks are emerging in OPEC+’s united façade once again - what will that mean for the price of crude?

Markets are starting the week off on a bullish note on the back of US stimulus package hopes, with equities rising across the globe, bond yields reversing Friday’s surge, and oil prices supported near their 14-month highs.

Crude oil will be particularly interesting for traders this week ahead of Thursday’s highly-anticipated OPEC+ meeting. After all, the cartel’s failure to reach an agreement was one of the primary factors that drove oil prices into negative territory last April (I still have trouble believing this happened, nearly a year later!). After that catastrophic development, coordination between Saudi Arabia and Russia increased, culminating in a nearly 9.7M b/d cut to production to keep prices supported.

Ahead of Thursday’s meeting, cracks are emerging in OPEC+’s united façade once again. Saudi Arabia reportedly wants to keep the current production cuts in place until at least April, while Russia and its allies are pushing for releasing another 1.5M b/d of supply onto the market. With oil prices testing 14-month highs and demand likely to increase as vaccine distribution accelerates across the developed world, there is a compelling case for producers to release at least some additional supply to meet incremental demand.

One other dynamic at play is the unprecedented winter storm hitting the US state of Texas. Forced closures of drilling rigs have slashed about 4M b/d from US production and refining capacity over the last two weeks, though warmer weather is expected to bring most of that production back online this week. Nonetheless, this temporary disruption has contributed to surging oil prices and allowed other global producers (including OPEC+ countries) to draw down excess inventories. At the margin, last month’s shocking weather in the southern US could tilt OPEC toward increasing production later this week.

As we noted earlier, oil prices on both sides of the Atlantic have surged in recent months on supply restrictions and optimism about the prospects for demand to pick up throughout the year. Heading into this week, West Texas Intermediate (WTI) crude is holding steady near a 14-month high near the top of its 4-month bullish channel.

While the US oil blend remains in a healthy uptrend, there are some technical signs that a pullback may be overdue, especially if OPEC+ opts to increase production by more than expected. Specifically, the contract’s 14-day RSI indicator is showing a bearish divergence, signaling declining buying pressure despite a marginal new high in price, as WTI approached previous resistance in the $63.00 area: 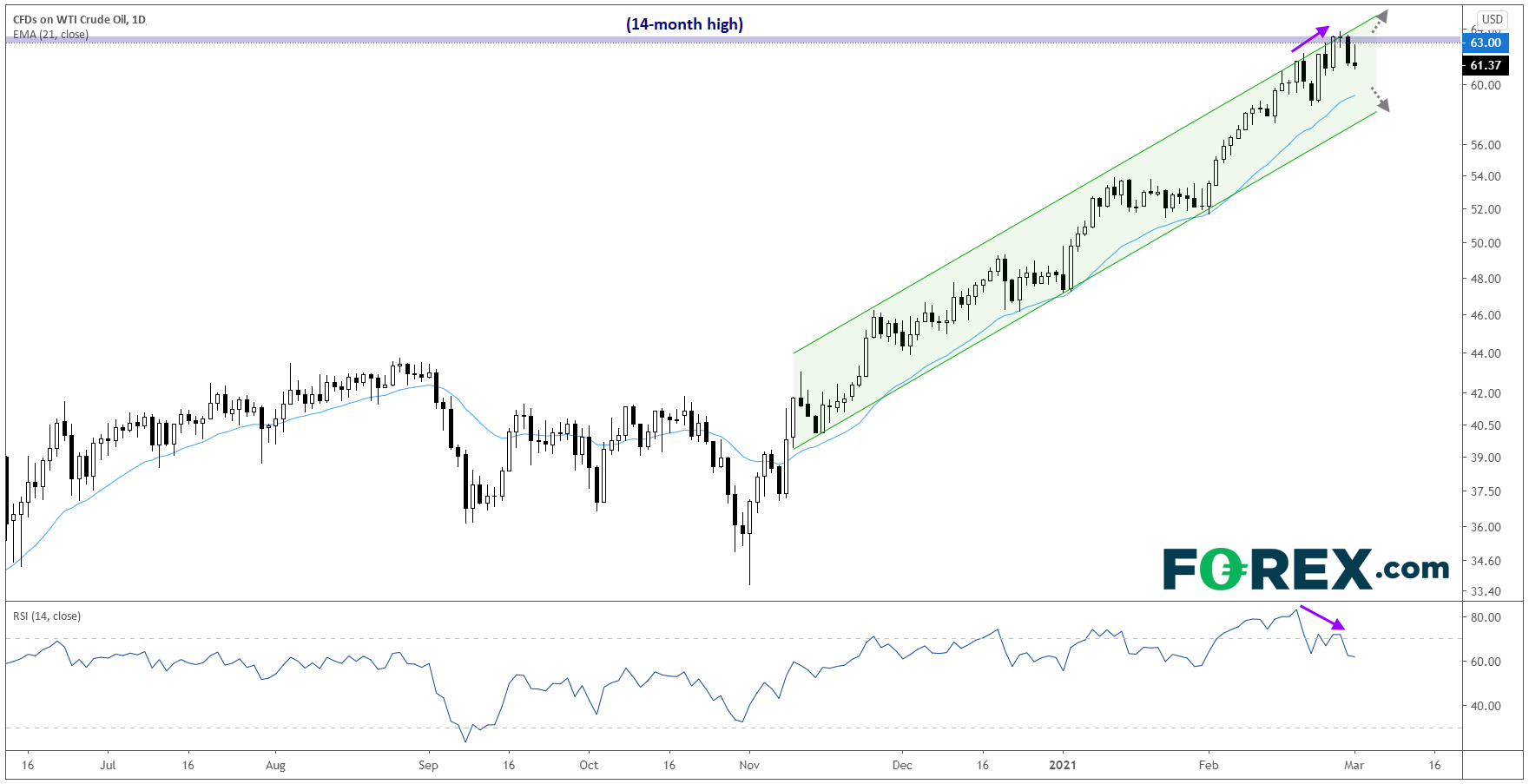 If this short-term bearish scenario plays out, WTI could pull back to test previously-reliable support at its 21-day EMA near $59.50, with a break below there potentially exposing the bottom of the established bullish channel near $58.00.

On the other hand, OPEC+ countries could be swayed by Saudi Arabia’s influence and hold off on production increases for another month. While not the most likely scenario in our view, it’s certainly in the range of outcomes and would likely lead to a rush of buying pressure in WTI. If that plays out, it could drive WTI oil to a fresh 14-month high above $63.50 and open the door for a continuation up to the 2019 high near 2016.

Put simply, Thursday’s OPEC+ meeting may well be the event that sets the trend for oil prices for weeks to come.