The so-called OPEC+ group of oil producers, which includes the traditional players in the oil cartel as well as non-OPEC countries such as Russia, look set to agree on cutting oil production to help shore up prices, defying calls from US President Donald Trump to leave output unchanged and keep prices low.

The so-called OPEC+ group of oil producers, which includes the traditional players in the oil cartel as well as non-OPEC countries such as Russia, look set to agree on cutting oil production to help shore up prices, defying calls from US President Donald Trump to leave output unchanged and keep prices low. The OPEC is meeting in Vienna today ahead of a summit with oil producers outside of the cartel (i.e. OPEC+) on Friday. Oil prices have fallen sharply nevertheless amid concerns the potential cuts could be lower than expected, with a barrel of Brent oil costing about 4% lower at $59.00.

Judging by the incoming remarks from several OPEC ministers, it is not a question of whether the cartel will decide to cut supplies or not, but by how much. They are fully aware of the risks of another severe supply glut developing if they take no action. OPEC countries simply cannot afford to see another 2014-style slump in oil prices after a near 30% plunge over the past couple of months.

It is understood that Saudi Arabia wants the OPEC to reduce output by around 1 million barrels per day, but this is dependent on how big the supply reduction from Russia will be - if any. The OEPC, already losing market share to the US shale oil producers, will not want Russia to gain further advantage at its expense. If Russia were to cut its production by, say, 250,000 bpd, which is likely in our view, then the total supply reduction from the OPEC+ group could be around 1.3 million bpd.

The problem for the OPEC is that it’s de facto leader, Saudi, is facing significant pressure from the US, its key western ally, not to cut oil production. Yesterday, the US President tweeted: “Hopefully OPEC will be keeping oil flows as is, not restricted. The World does not want to see, or need, higher oil prices!” But just like the US is pursuing its own interests, one cannot expect Saudi to do anything different - even despite the controversy surrounding the killing of journalist Jamal Khashoggi in Istanbul at the Saudi embassy.

So, this might mean a mere conservative cut in crude output – a middle ground that is not too disappointing in the eyes of participants in the oil market, yet not too severe to prompt angry reaction from Washington.

Indeed, oil prices fell sharply on Thursday morning when Al-Falih, Saudi’s energy minister, signalled that the production cut could be less than expected. He said an output cut of 1 million bpd could be sufficient, contradicting his previous assessment of 1.3 million bpd. But, as mentioned, a total of 1.3 million bpd cut could nonetheless be agreed upon from the OPEC+ group.

If the total output cut is indeed around 1.3m bpd, I think Brent oil prices will probably not fall too much further, given the 4% or so drop on Thursday in response to the rumours, with $55 being a potential level where it might bounce from. If the cut is larger than that then prices could certainly bounce back – the extent of which will depend on the size of the cut. And it is probably safe to say that a failure to reach a deal could see Brent oil prices plunge towards the low $50s almost immediately. 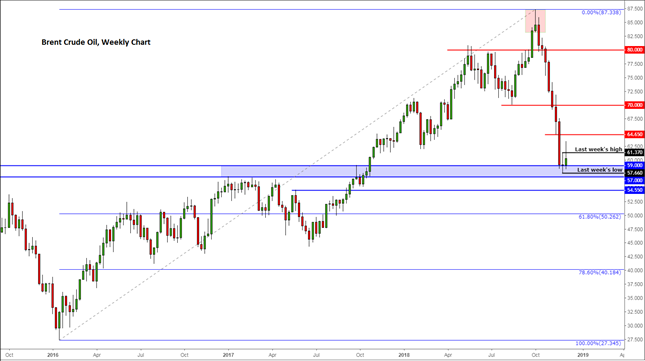