Lots of headlines have come out ahead of tomorrow’s much-anticipated OPEC meeting. They have been largely oil-negative with Iran in particular being very vocal, saying that it won’t reduce its output and at the same time demanding that Saudi Arabia should shoulder most of the responsibility. Iraq, too, wants to be except from production cuts. We have heard it all before...

Lots of headlines have come out ahead of tomorrow’s much-anticipated OPEC meeting. They have been largely oil-negative with Iran in particular being very vocal, saying that it won’t reduce its output and at the same time demanding that Saudi Arabia should shoulder most of the responsibility. Iraq, too, wants to be except from production cuts. We have heard it all before. Iran and Iraq’s oil ministers are obviously trying to win the best deal for their respective countries. Expect to hear more tit-for-tat exchanges leading up to and during the meetings tomorrow. But Iran is playing a clever game. They know full well that Saudi Arabia is desperate to see higher oil prices, despite the latter putting on a brave face. The recent appointment of Khalid Al-Falih as Saudi’s new energy minister suggests that the Kingdom has admitted that his predecessor, Ali Al-Naimi, had made a mistake when opting for market share rather than controlling prices in that disastrous decision in 2014. Two years on and the country’s finances are in tatters (in Saudi standards). For Saudi, oil prices must go up at any cost. That’s what Iran and Iraq are probably thinking. These countries obviously also want to see higher prices, but they know that the pressure is on Saudi, rather than them. They are thus making a calculated gamble by asking that they should be except from freezing their oil production at the levels demanded by the OPEC.

So, at the moment, a deal to limit oil production looks bleak and oil prices are reflecting that view. But the OPEC is known for leaving things to the last minute. The markets are not exactly calling their bluff but it is always a positive sign to see that despite today’s 3.6% drop things are relatively stable ahead of the meetings, with both contracts hovering around their rising 200-day moving averages. I wouldn’t call that bearish; rather prices are basically in consolidation and bang in the middle of the summer’s range. But it could be that investors are half expecting that the OPEC will come to some sort of an agreement tomorrow because failure to do so would be catastrophic for most members. They could very well be wrong of course, like they were in 2014, but this time surely the OPEC ‘must do something’. One way or another it sure will go down to the wire. Expect to see lots of noise then a big price move in oil prices tomorrow, because ultimately one camp will be proven wrong. Will it be the buyers or the sellers?

I think if after all this, the OPEC agrees to cut oil production, then Brent and WTI will at the very least rise to test their respective 2016 highs at $53.70 and $51.90. It is difficult to say if prices will then go immediately beyond those levels without knowing some details. The alternative scenario is that the OPEC will maintain status quo. In this case I think there is scope for both oil contracts to fall quite sharply, though I don't think we will go below $40 in a meaningful way. So overall I think there is more room to be made on the upside than downside, simply because the probability of a production cut appears to be slimmer than there being no deal. In other words, some of the negatively is already priced in. 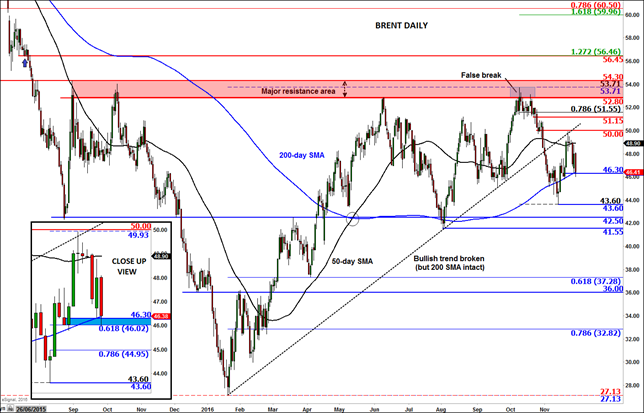