Pound bulls hoping to see a big beat on the July inflation numbers were left disappointed, as the data merely met expectations.

Pound bulls hoping to see a big beat on the July inflation numbers were left disappointed, as the data merely met expectations. Although off its lows, sterling remained under pressure after breaking the $1.27 handle overnight following yesterday’s news of weaker-than-expected growth in wages, and amid ongoing concerns over a no-deal Brexit outcome. But after falling sharply over the past few weeks, the sellers were understandably a little more conservative this morning as they looked forward to US macro data in the afternoon for direction. Overall, investors’ appetite for the dollar remains insatiable thanks to growing expectations over another couple of rate hikes this year from the Federal Reserve. But as the pound gets cheaper relative to the dollar, the probability of a reversal for the cable rises each day. We do think the GBP/USD is very close to a potential bullish reversal, although so far we haven’t seen any clear evidence of such an outcome. So the wait continues.

According to the ONS, firmer petrol prices in July helped to push the rate of inflation higher for the first time since last November, which saw transport costs rise 5.7% year-over-year.  The headline Consumer Price Index (CPI) measure of inflation accelerated to 2.5% year-over-year in July from 2.4% in June. Core CPI was 1.9%, unchanged from the previous month. Both measures were bang in line with expectations and so the pound’s immediate reaction was to go down. Other measures of inflation were mixed. The Retail Price Index (RPI) unexpectedly eased to 3.2% y/y from 3.4% last and expected. The House Price Index (HPI) also eased back to 3.0% y/y from 3.5% last, but this was still higher than expected. Meanwhile the Producer Price Index (PPI) input prices jumped 0.5% month-over-month as the weakness in the pound raised import costs. However, producers absorbed the costs as PPI output prices – or so-called factory gate prices – were surprisingly flat on the month.

Retail sales among handful of US data due later

In the afternoon, we will have some important macro pointers from the US, including retail sales, Empire State Manufacturing Index and Industrial Production. Retail sales are expected to have risen 0.1% in July compared to the 0.5% increase in June, while core sales are seen rising 0.3% following their 0.4% rise previously. In the event these show weakness then the dollar may be hit by profit-taking after its recent sharp gains. This could encourage short sellers in the GBP/USD to take profit, leading to a bounce. However, if the US macro pointers turn out to be stronger then the dollar may further extend its gains.

GBP/USD looks severely oversold but no bullish signs yet

But you do have to wonder how much further will the GBP/USD have to fall before bargain hunters dip their toes in and support prices. The cable is severely oversold, according to the RSI indicator which is sitting in low 20s, below the threshold of 30. The RSI is this oversold because of the GBP/USD’s renewed sharp slide since the start of August. But at these levels we are looking for a potential reversal pattern to emerge, which could help fuel at least a short-term recovery, perhaps back towards 1.30. That being said, the GBP/USD formed a bearish engulfing pattern on its daily chart yesterday, which is anything but a bullish sign. If this is a true bearish sign, then rates need to hold below short-term resistance at 1.2730 to keep the pressure on. However, if the GBP/USD were to break decisively above this level, then this would be an early indication that the latecomers have gotten trapped trying to chase bearish momentum. Once we see such signs emerge, only then will we start feeling more confident about the prospects of a recovery. For now, though, the path of least resistance continues to remain to the downside. 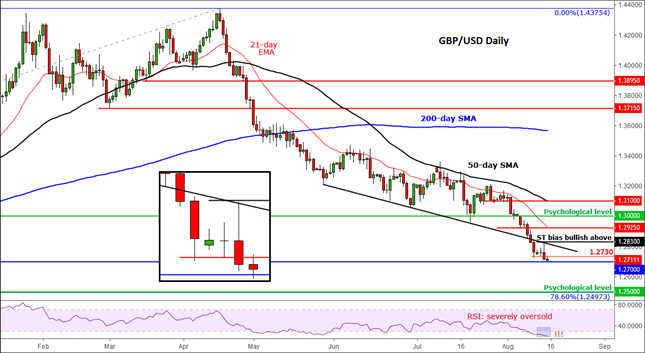