The dollar started the new week lower, supporting the major currency pairs such as the EUR/USD and GBP/USD this morning. There wasn’t any fresh news out to impact the greenback, so its weakness can be attributed in part to profit-taking. In the afternoon, though, we had one the most important US data release for this week, namely retail sales. This showed a slightly better-than-expected print, helping the dollar to rebound off its lows. But there won’t be any other significantly important US data to look forward to this week, although we will have important data from other key regions, in particular the UK. Tuesday will see the release of UK average earnings index, jobless claims and unemployment rate, while CPI, RPI and PPI input will be published on Wednesday ahead of retail sales on Thursday. Thus, the pound could be in for a volatile ride with the never-ending Brexit talks also keeping speculators on their toes. If this week’s data turn out to be overall better than forecasts then we would favour looking for bullish setups on the pound against her weaker rivals such as the yen. Otherwise we would favour looking for bearish setups on the GBP/USD, because of our current bullish bias on the dollar.

GBP/USD’s hammer could be a false hope for bulls

From a technical perspective, we are not convinced that the GBP/USD’s formation of a bullish hammer candle on Friday marks the low for the cable, for we are still bullish on the dollar. So far, there hasn’t been any firm acceptance above Friday’s range, making the GBP/USD bulls sweat a little. But if rates go back below Friday’s high and hold below it then this would point to a possible trap for the bulls, which would be bearish. In any case, we will remain objective and only turn bullish on the cable when there is a break in market structure of lower lows and lower highs. The most recent high was at 1.3470. So, this would be the line in the sand for us. As for as the dollar is concerned, well its weakness today could well turn out to be the start of a correction, though we are not convinced and in any case it is far too early to say for sure. Consequently, we will treat the dollar weakness as being “innocent until proven guilty” and therefore retain our long-term bullish bias on it until the charts tell us otherwise. 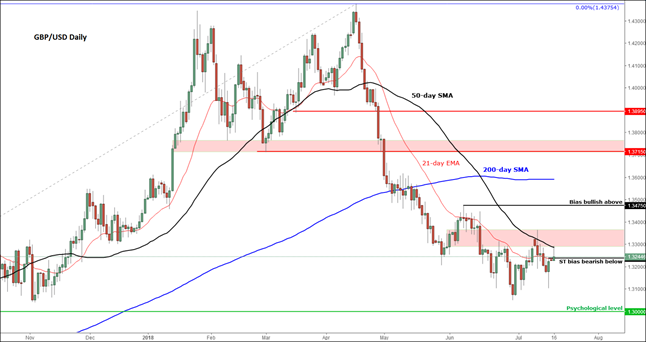