Pound finds renewed strength ahead of FOMC, BoE and NFP

The British pound, which has so far outperformed its major rivals in 2019, has found renewed strength over the past couple of days.

The British pound, which has so far outperformed its major rivals in 2019, has found renewed strength over the past couple of days. At the time of writing, the GBP/USD was hitting new highs on the week at 1.3075, while the EUR/GBP was also not too far off its weekly low at 0.8586 hit earlier in the day. The likes of the GBP/JPY, GBP/AUD and GBP/CAD all rallied yesterday and were again in the positive territory when we went to press. There is no clear catalyst behind the pound’s upsurge, but we reckon it is partly due to investors continuing to price out the prospects of a messy exit from the EU, after the parliament rejected a no-deal Brexit earlier this year. It remains to be seen how the pound will react going forward, given that it faces key tests from both sides of the pond this week, with the FOMC decision looming later this evening, the Bank of England’s Super Thursday tomorrow and the always-important US monthly jobs report coming up on Friday.

There’s no major update on the Brexit situation. Although Labour's governing body has rejected the idea of campaigning for a second referendum under all circumstances, it has nonetheless agreed to support one if it cannot get changes to the government's Brexit deal or an election. The prospect of another referendum means there is still a very small chance that Brexit might not happen at all, or if it does eventually happen, it won’t be the worst-case scenario in terms of its impact on the economy with all political parties being against a no-deal Brexit.

The pound being higher today may also be due to the fact UK retailers Next and Sainsburys reported better-than-expected numbers, suggesting that the retail sector is not doing too badly given the circumstances – although this could have been due to unusually warm weather over the Easter holiday. In terms of macro data, the latest UK manufacturing PMI printed 53.1 as expected, although this was lower compared to 55.1 recorded in March. Meanwhile, the Bank of England reported that Mortgage Approvals fell to 62,000 in March versus 64,000 expected and 65,000 the month before. However, despite this, Net Lending to Individuals climbed to £4.7 billion, higher than £4.5bn expected and last.

Looking ahead: FOMC, BoE and NFP

The GBP/USD will come into sharper focus given that we have the Federal Reserve’s rate decision this evening, the Bank of England’s Super Thursday (as well as UK Construction PMI) tomorrow and the US monthly jobs report (and ISM services PMI) on Friday.

It will be interesting to observe how the pound will behave going forward, but so far this year, it has clearly outperformed its major rivals as can be seen below. 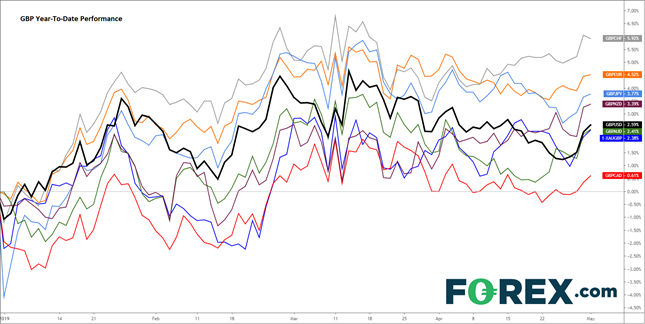