Silver: Precious metals shaky ahead of US GDP

Gold and silver have been stuck between a rock and hard places. On the one hand, the mild equity market sell-off and uncertainty surrounding the US presidential election, among other risks, have been supportive for the perceived safe-haven metals. On the other hand however, the dollar and government bond yields have been rallying, which have dampened the appeal of these noninterest-bearing and buck-denominated precious metals. The dollar and US Treasury yields have been rising recently due to increasing expectations about tighter monetary policy conditions in the US.

Gold and silver have been stuck between a rock and hard places. On the one hand, the mild equity market sell-off and uncertainty surrounding the US presidential election, among other risks, have been supportive for the perceived safe-haven metals. On the other hand however, the dollar and government bond yields have been rallying, which have dampened the appeal of these noninterest-bearing and buck-denominated precious metals. The dollar and US Treasury yields have been rising recently due to increasing expectations about tighter monetary policy conditions in the US. Supporting this view was Thursday’s stronger-than-expected US data in the form of pending home sales and jobless claims. From a data point of view, there is one more very important economic number that could impact gold and silver as we approach the end of this week and ahead of next week’s busy economic schedule: the US third quarter GDP, due out later today. The world’s largest economy is expected to have advanced 2.5% in the third quarter on an annualized basis, versus 1.4% in Q2. Should the GDP figures surprise to the upside then the dollar could extend its gains and that should be bad news for dollar-denominated precious metals. Conversely, a very poor growth number may reduce the odds for a December rate hike, which in turn could weigh on yields and therefore support precious metals.

The US Federal Reserve, Bank of England and Bank of Japan are all scheduled to announce their monetary policy decisions next week. On top of this, we will have some very important economic data coming up from the US, namely the October jobs report, which could influence the Fed’s decision at its next meeting in December, when it is widely expected to raise rates again. Thus, the potential is there for gold and silver, and indeed many other financial markets, to move very sharply next week.

Now from a technical perspective, silver, unlike gold, is yet to break below its long-term bullish trend line or the 200-day moving average. However, it could just be a matter of time before this happens, should gold extend its decline as we expect that it might – see the details in THIS article. Silver’s recent price action appears to be rather bearish. After that big breakdown below $18.50 support, its recovery attempts have been very weak. As can be seen on the chart, every time the precious metal has tried to climb above $17.75 on a closing basis, it has failed. The lack of a more meaningful bounce here suggests the selling is probably not done yet. Indeed, a break below the aforementioned trend line or the 200-day average could encourage new momentum-based speculators into this market. That could exert enough pressure on silver to potentially drop to the next level of support at $17.15 before possibly making a move towards the long-term 61.8% Fibonacci retracement level at $16.50 next.

This bearish view would become partially invalid upon a closing break above $17.75 and more so above $18.00. In this potential scenario, silver may rise to test the broken old support range in the $18.40/50 region next, or even possibly rise towards the point of origin of the breakdown around $19.00. 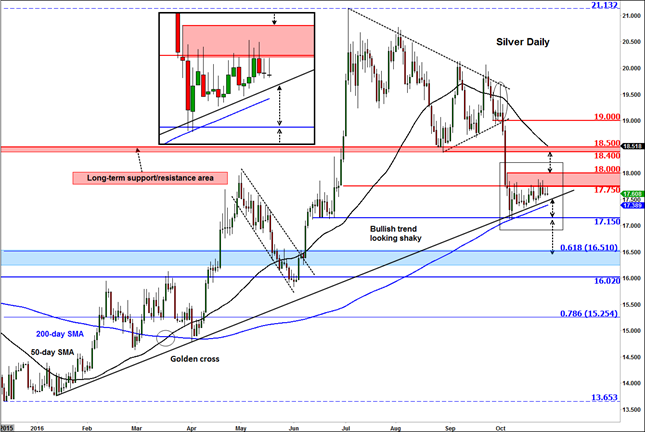