PureGym IPO: Everything you need to know about PureGym

As lockdown lifts and gyms see a boost to business again, PureGym fitness centre has started to explore a potential IPO. Discover everything we know about the listing and the company’s recent performance.

There’s still no firm date for when PureGym will list, but it’s now in the early stages of discussing raising equity from the public stock market.

Discover what an IPO is and how it works

The company has started exploring options with private investor and co-owner of PureGym Leonard Green & Partners, and it’s also appointed investment banks Morgan Stanley and Barclays as lead advisers. The Royal Bank of Canada, Jefferies and Berenberg are lined up as bookrunners.

The potential listing comes after a year of gym closure amid the Covid-19 pandemic. However, it’s worth noting that PureGym had previous plans for a UK listing in 2016 that were eventually cancelled due to uncertainty following Brexit.

How much is PureGym worth?

PureGym could be worth £1.5 billion after its IPO, according to reports, which could land the company in the FTSE 250. However, its last true valuation was in 2017, when PureGym was bought by Leonard Green & Partners for £600 million.

How to trade PureGym

Once it lists, you can trade PureGym in the same way as any other share on the market. In the meantime, choose from hundreds of other global stocks with Forex.

Alternatively, if you’re not ready to trade live markets – but want to practise ahead of the PureGym listing – you can set up a free demo account to trade in a no-risk environment.

What does PureGym do?

PureGym is a fitness centre chain, which company was founded in 2008, with the goal of creating low cost, high quality fitness experiences. It’s now the UK’s largest gym operator by both number of gyms and members, boasting over 270 gyms with 1 million members.

PureGym is also the second largest operator in Europe, with a total of 500 gyms across the UK, Denmark and Switzerland thanks to its acquisition of Fitness World Group. The combined business has approximately 1.9 million members.

How does PureGym make money?

PureGym makes money via the membership fee it charges users, as well as additional costs such as vending and consumables (food, drinks and equipment) and income from personal training services. Its revenue makeup is as follows: 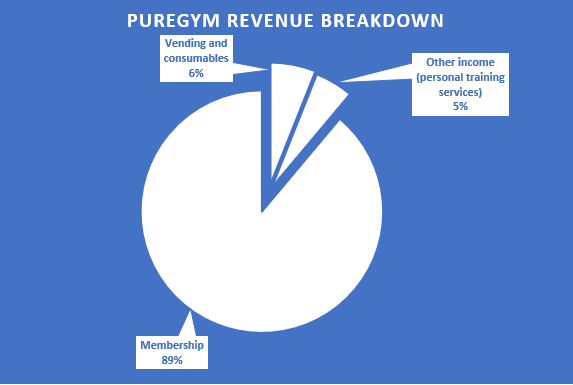 Demand for gym memberships has seen a resurgence following lockdown easing, which has encouraged PureGym to take such a positive outlook. The number of people paying for its gym memberships was 1.6 million in August 2021, which is nearly back at the pre-pandemic levels it hit in December 2019. According to a bondholder presentation in August, visits to PureGym fitness centres were up about 14% on pre-pandemic levels in the UK, Denmark and Switzerland.

PureGym has continued to raise money throughout the pandemic via the sale of bonds. In November 2020 it raised €445 million ($525 million), benefiting from a generous credit market amid the vaccine rollout last year. The proceeds were used to repay a short-term loan that had been in place to fund its acquisition of Fitness World. PureGym used the bond market again in March 2021 to raise €45 million for general corporate purposes.

PureGym is not profitable; it currently operates at a loss of £82.1 million for the six-month period ending June 30 2021. This is a reduction from a loss of £105.8 million the year before, although the pandemic played a major factor in that figure. PureGym’s chief executive, Humphrey Cobbold, said the company was losing £500,000 a day during Q1 2021 when gyms were closed.

The company’s earnings release in May 2021 showed its net debt stood at £778 million ($1 billion) at the end of Q1, which is £33 million more than the pre-pandemic total. The company expects net debt to rise in the near term while they negotiate with landlords when to pay their rent that was previously deferred amid the pandemic.

Learn how to read a company earnings report

What is PureGym's business strategy?

PureGym’s business model is based on providing members with affordable access to exercise, according to the company’s Q2 earnings. It does this by focusing on customer wants and needs and providing the technology to make exercising as enjoyable as possible.

The company has tapped into the growing demand for ‘value-for-money’ memberships seen in the past few years, along with competitors such as GymBox and the Gym Group. This strategy is based on delivering low-cost memberships, no ‘locked-in’ contracts and high standards of gym equipment, cleanliness and 24/7 training hours.

PureGym representatives have said they’re ‘well-positioned to take advantage of this post-pandemic recovery’ and believe their competition has been weakened more-so than itself. While the company was cautious amid the pandemic, it still opened 13 new gyms in the new UK and introduced its flexible membership option in Switzerland.

PureGym is owned by US private equity investors Leonard Green & Partners, which bought the gym operator for £600 million in 2017.

Board of directors of PureGym

PureGym’s board of directors, according to its website, are: