Q2 GDP much worse than expected, but is it really that bad for traders?

Although GDP is a great economic data point for headlines, it isn’t a great “trading” number

Gross Domestic Product (GDP) is an exciting number for headlines, as it shows how much growth was produced in a quarter (or year).  However, for traders and investors, the print usually isn’t “tradable”, as it is a backwards looking economic data print that is revised two times during the following quarter.  For example, today’s GDP print was for Q2, which ended a month ago.  At the end of August, it will be revised again, which will be 2 months ago. Finally, at the end of September, Q2 GDP will be revised again, which will have been 3 months in the past.  Traders are forward looking, so a GDP which includes data from March isn’t that useful.

However, today’s Q2 GDP print has a bit more significance as it sheds some light on the high expectations of the economic recovery.  Some are expecting growth to peak during these summer months as the US economy is wide open and people are spending.  However, heading into the fall and winter months, some are concerned the Delta variant may continue to rear its head.  Today’s Q2 GDP release was 6.5% vs 8.5% expected and 6.4% in Q1.  The Deflator, which measures the changes in prices for ALL goods and services,  was 6.1% vs 5.4% expected.  Therefore, growth was weaker than expected, while inflation pressures were stronger than expected.  Private inventories were one of the culprits which pulled the headline number lower.  This was due to supply chain disruptions.  Once supply catches up with demand, this data point should increase, so watch for revisions higher in Q3.  Government spending also fell 10.4% in Q2.

After yesterday’s FOMC meeting, in which the Fed noted that there has been progress towards their goal to taper, but not substantial progress, the US Dollar moved lower and EUR/USD moved higher.  EUR/USD broke out of a descending channel it had been in since mid-June and is continuing higher today after the weaker Q2 GDP.  Resistance is at the 38.2% Fibonacci retracement from the May 27th highs to the July 21st lows at 1.1842.  Horizontal resistance is at 1.1942.  Above there is a strong confluence of resistance, which includes the 50% retracement of the previously mentioned timeframe, the 200 Day Moving Average, and the psychological resistance level at 1.2000.

On a 240-minute timeframe, EUR/USD is banging its head up against the 61.8% Fibonacci retracement level from the Jun 25th highs to the July 21st lows at 1.1890.  Support is at the July 27th highs, just above the top downward sloping trendline of the short-term channel near 1.1830.  Below there, support is at yesterday’s lows of 1.1722. 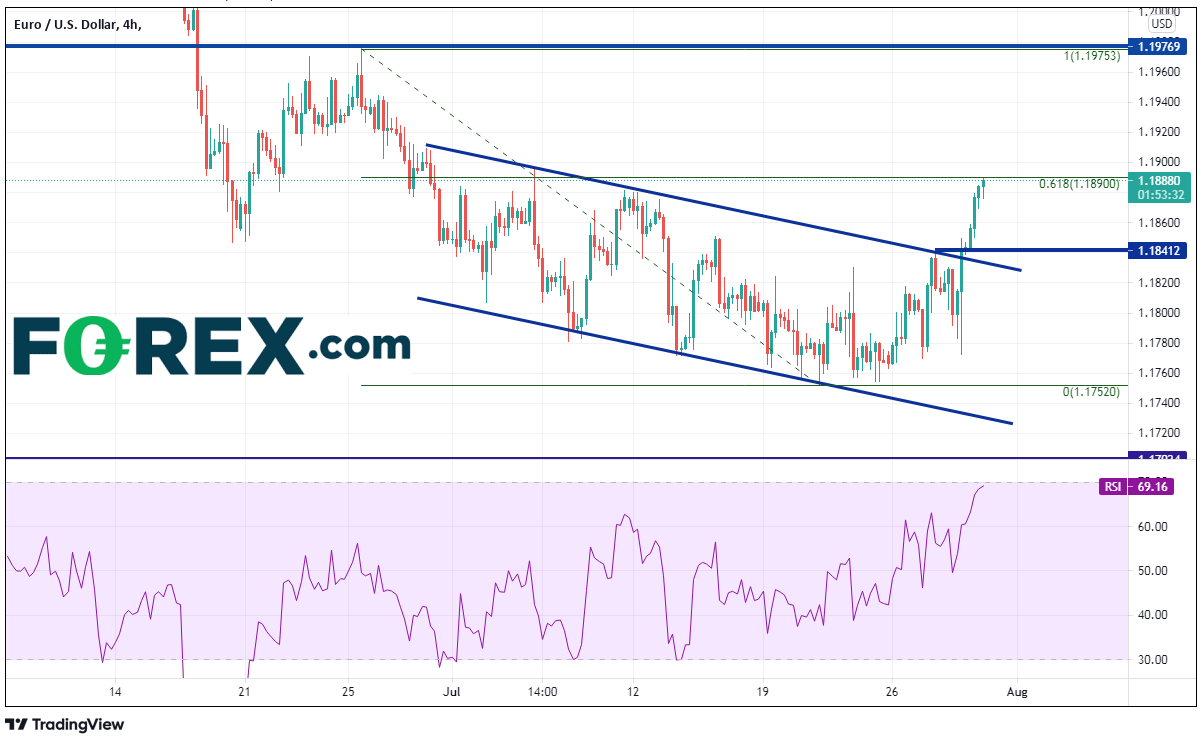 Although GDP is a great economic data point for headlines, it isn’t a great “trading” number.  However, with high expectations of the recovery in the US, today’s Q2 print was a bit disappointing.  Does this confirm the Fed’s view that substantial further progress is “a ways away”?  Markets seem to think so as the DXY head lower (and stock indices head higher).