RBA Preview: Will They Cut?

The RBA meets tomorrow and the market expects the Central Bank to leave rates unchanged.

The Royal Bank of Australia (RBA) meets tomorrow morning (tonight at 10:30pm EST) and the market expects the Central Bank to leave rates on hold at 0.75%.  The RBA last cut rates on September 3rd, 2019 after cutting twice earlier in the year.  They last met on December 3rd  and in their statement the RBA said they would continue to monitor labor markets, as well as domestic and global factors (which included Phase One of the US-China trade deal),  As with many other central banks, they also said it is reasonable to expect low rates for an extended period of time.

However, since their last meeting the Central Bank has new factors it must address when making their decision and the statement.  The labor data has been mixed.  Although the headline Employment Change numbers have beat expectations, the number of part-time jobs has outpaced the number of full-time jobs.  Earlier today, PMI data was mixed but building permits were better.   Before the meeting we will also get a look at HIA New Home Sales (MoM) for December.  Expectations are for -2.5% vs -0.5% last.

The economic data is the easy part for the Central Bank to discuss this month.  However, there have been three new developments the RBA board members must consider when making their decision (and the statement):

On Friday, we discussed in our Week Ahead Chart to Watch how the AUD/USD was closing near new lows not seen since 2009.  The pair hit the target of a head and shoulders pattern and over the past few weeks, has been quickly descending towards .6670.  The pair tried to push higher today to .6707, only to be met by sellers who pushed price lower and close the day near .6689.  (Note the RSI is in oversold territory and turning up.) 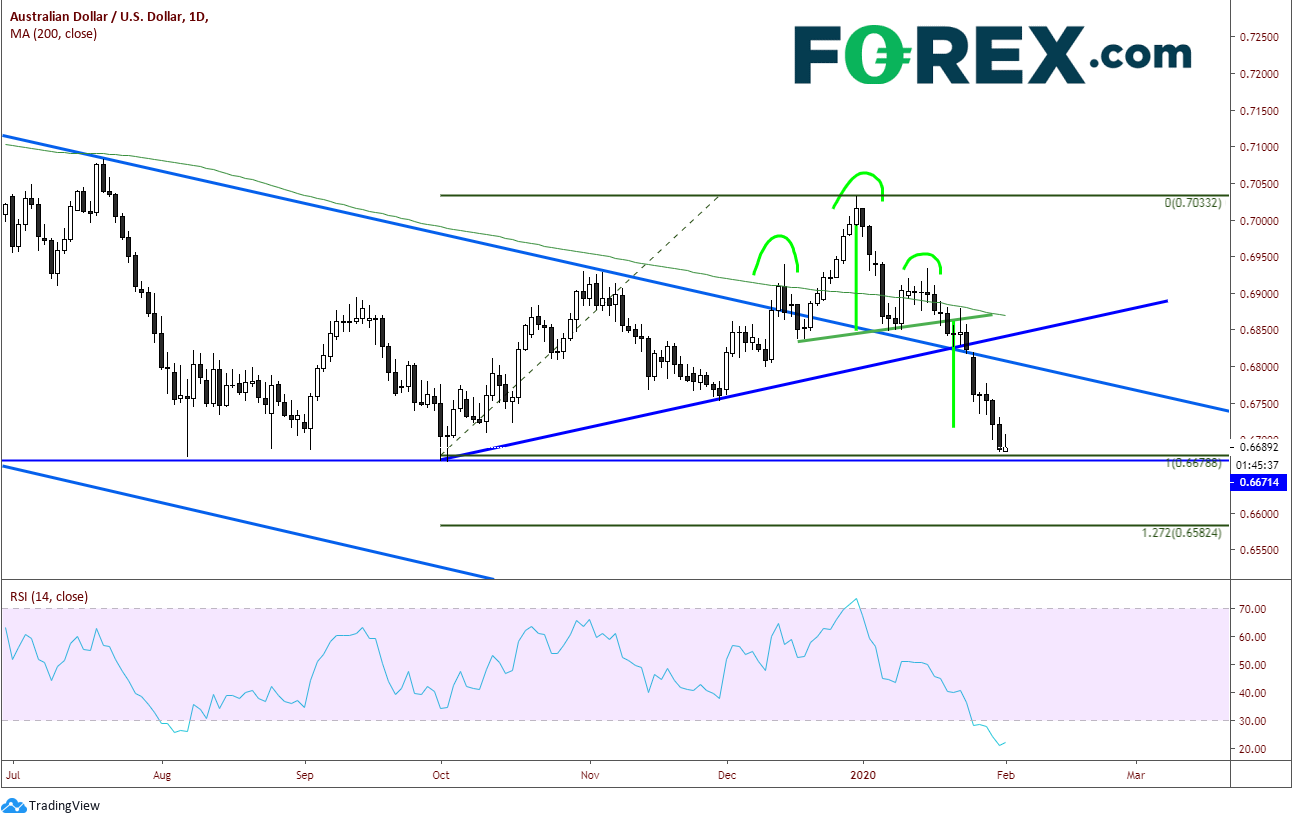 The market is expecting unchanged from the RBA. But has a price cut already been priced into the market?  If not, how much dovishness will it take for the market to continue to move lower?  AUD/USD has moved 300 pips lower since January 15th.  One must consider how far price has already moved and consider whether there is a “Buy the rumor, sell the fact”.