A second consecutive hawkish surprise from an RBNZ board meeting today as the bank elected to keep rates on hold at 0.25% as widely expected. However, guidance was changed to reflect that the current level of accommodation could be wound back and that the Large Scale Asset Purchase program (LSAP) would end next week the 23rd of July.

The early termination of the LSAP or QE comes as the biggest surprise. The purpose of the LSAP was to lower long-term interest rates as well as the exchange rate and to underpin economic growth and inflation. The program was scheduled to run until June 2022.

“The Committee agreed that further asset purchases under the LSAP program were no longer necessary for monetary policy purposes and directed staff to halt purchases by 23 July 2021.

The bank's assessment of economic activity was upgraded and in the final paragraph of the press release, the following forward guidance was noted: “the Committee agreed that the level of monetary stimulus could now be reduced to minimise the risk of not meeting its mandate.”

As outlined in yesterday's preview, the expectation heading into today's meeting was that the RBNZ would endorse market pricing of a first interest rate hike by November 2021. However, it is now clear that meetings in mid-August and early October are also live. Even more so if Q2 inflation data on Friday is higher than expected.

Following the announcement, NZDUSD rallied from .6965 to a high near .7020, building on the signs of a base noted yesterday near .6920. AUDNZD has fallen from 1.0700 to a low of 1.0626, leaving it vulnerable to a deeper decline pending the outcome of tomorrow's Australian labour market data for June.

The market is looking for employment to rise by 25k and the unemployment rate to fall to 5.0%. The labour market remains the main focus of the RBA as it looks for evidence that the faster than expected improvement in the labour market is feeding through into higher wages.

Providing there is no outsized gain in employment like the one seen last month, the expectation is for AUDNZD to continue lower towards the year-to-date low at 1.0540, with risks below here towards 1.0418. 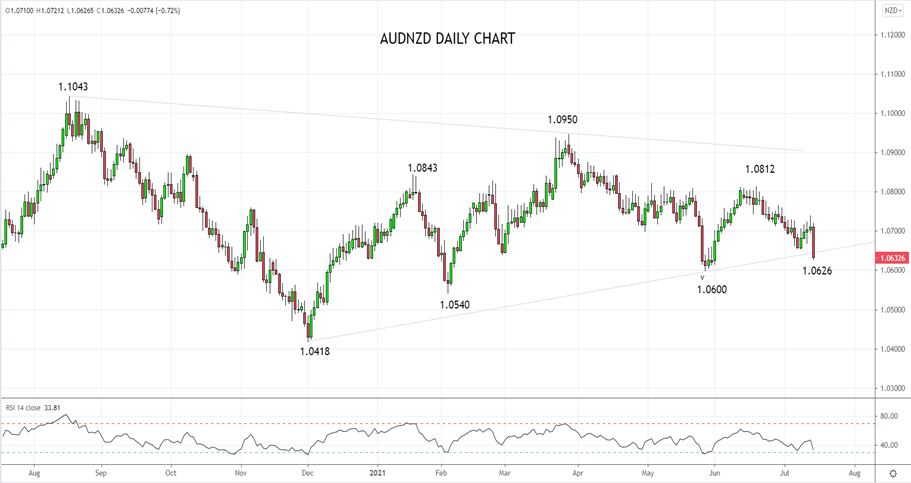 Source Tradingview. The figures stated areas of the 14th of July 2021. Past performance is not a reliable indicator of future performance.  This report does not contain and is not to be taken as containing any financial product advice or financial product recommendation